As The Voice’s Season 21 Battles came to a close Tuesday, we were treated to two stellar sing-offs and two… well… other ones. But as John Legend, Blake Shelton, Kelly Clarkson and Ariana Grande winnowed down their teams to just the contestants that they wanted to take to the Knockouts, a few frontrunners began to emerge, including the Cunningham Sisters. Yes, the tweens are as cute as cartoon characters, but they’re not just adorable. In fact, they sent packing a contestant much older and more experienced than they are who delivered an utterly winning performance herself. Read on, and we’ll discuss how…

Team Ariana: Ryleigh Plank (Grade: B) defeated KCK3 (Grade: C+) on “Come On Over Baby (All I Want Is You)” | Once the contestants had run through their Christina Aguilera cover — and I’d gotten over Ari’s spot-on impersonation of advisor Kristin Chenoweth — Coach Grande advised the siblings to find individual moments to stand out, lest they feel like Ryleigh’s backing singers. As for Ryleigh, she was instructed to maybe not take her performance to 11 every second — sound guidance, given that for a while there, she kinda delivered each line with an exclamation point. On stage, oof. The foursome got off to a rough, disjointed start. KCK3 had some lovely moments but too often seemed not nearly as tight and harmonious as you’d have hoped. (Honestly, they might have fared better competing individually.) For her part, Ryleigh gave an energetic performance that probably came as close to going over the top as one could get without actually going over (or being Joshua Vacanti). She was fun to watch, though, and vocally more memorable than KCK3. As Blake put it, she “attacked” the moment. 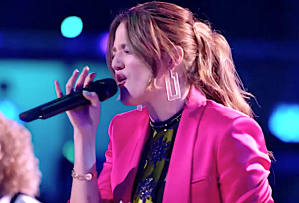 Team Kelly: The Cunningham Sisters (Grade: A) defeated Parker McKay (Grade: A-) on “It’s My Party” | OK, show of hands: Who else was like, “Whaaat?” as Kelly was telling her team members that she envisioned a Lana Del Rey, Radiohead, Amy Winehouse version of Lesley Gore’s golden oldie. “It’s a little unexpected,” said advisor Jason Aldean, the master of understatement. But as the contestants rehearsed, it became clear that Kelly was a genius, and it was gonna work. Dunno if I heard Radiohead in there, but… damn. That was good. The biggest issue Kelly heard was that it sounded too good, too “worked on,” not always raw and emotional enough. When the threesome hit the stage, I started looking for shoes to throw. Parker was glorious, her voice so sumptuous and rich, I gained weight just hearing it. But those kids, man! They. Would. Not. Be. Outdone. They jammed their parts full of feeling that was so bare and in-your-face, I was ready to kick that Johnny guy’s ass for hurting them. What’s more, their harmonies were what I wanted but didn’t get from KCK3. Awesome Battle. Hate that Blake didn’t use his Steal on Parker; doesn’t seem right for her to go home after a performance that gorgeous.

Team Blake: Berritt Haynes (Grade: ???) defeated Kaitlyn Velez (Grade: ???) on “Yellow” | Eh, from the little bit that we heard of this Battle, I don’t think we missed much. Both contestants (who I think also got montaged during the Blinds) sounded like the definition of a “C” grade. 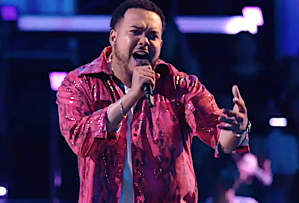 Team Legend: Paris Winningham (Grade: A-) defeated Jonathan Mouton (Grade: A) on “Here and Now” — Jonathan stolen by Blake | As the competitors rehearsed their Luther Vandross classic, advisor Camila Cabello noted that Paris’ tone has a tenderness to it (that John likened to Aaron Neville’s voice). Jonathan, on the other hand, has a memorable belt — when he stays on the mic. When the spotlight fell on the tag team, they turned out a lush rendition of the ballad, their vocals so in sync, you’d have sworn they’d been mixed in a recording studio. Who won, though? Jeez, that was tough to say. Though I’m a sucker for the absolute oomph that Paris gave his big notes (that hint of rasp didn’t hurt, either), I’d have to go with Jonathan. I’m not a fan of too much vibrato, but his was so well-controlled. I also got more depth of feeling from his performance, more nuanced shading. Luckily, since it was the last Battle shown, we knew all along that whoever didn’t “win” would be stolen by Blake, who remarked that the duet “sounded like a record.”

So, who did you think really won the last of the Battles? Vote for Tuesday’s standout in the poll below, then hit the comments with your reviews.