The producers of ABC’s The Bachelorette really love the idea that their Season 18 leading lady Michelle Young is a teacher. It’s a theme the show played up Tuesday night by opening the premiere with Michelle’s fifth-grade students in Minneapolis asking her how many boyfriends she would have and how many dudes she would kiss.

Many of Michelle’s suitors also took a cue from her profession, with guys like Rodney, a sales rep from Southern California, stepping out of the limo in a red apple costume. But it’s a good thing Michelle wasn’t grading the men because when she asked Rodney what kind of apple he was, he said a Granny Smith, not realizing that variety only comes in green.

Ever the helpful educator, Michelle laughingly told Rodney about his fruit faux pas later in the installment. And Clayton, a medical sales rep from Missouri, showed up with a yardstick and gave it to Michelle to use as a ruler for spanking him. Sure, Clayton. Why not? 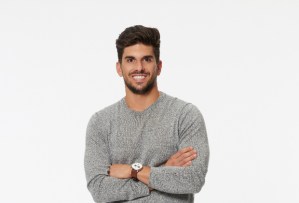 But Ryan, an environmental consultant from San Jose, California, took the whole schoolmarm motif to a whole new low when he showed up on The Bachelorette with notes on Michelle from her previous season with Matt James. He also had homework pointers on how not to be the villain and ways to get more screen time. Ewww.

Of course, hosts Tayshia and Kaitlyn “found” Ryan’s notes while checking out all the contestants’ hotel rooms and waited until Michelle flirtatiously ate ice cream with him to inform her immediately afterward about their creepy discovery. Michelle was instantly disgusted and went through the trouble of going to Ryan’s room to see the notes for herself. Although she was dressed in a seafoam green evening gown, Michelle was giving big angry teacher vibes as she read over the notes and frowned.

Michelle, who had left Ryan in the hall to think about what he had done, then informed Ryan that his notes were a red flag for her and she would be sending him home that night. Although the other dudes, some of whom described Ryan, as “arrogant,” weren’t at all sad to see Ryan go, some of them were frustrated that they missed out on getting to know Michelle better because she spent way too much time investigating Ryan’s weird cheat sheets.

While men like Texas sales executive Nayte, used the time after Ryan’s ousting to work his charms and nab the first impression rose, others such as JoMarri, a melodiously voiced personal trainer from Fresno, California, got lost in the shuffle and sent home. Then again, because this is The Bachelorette, Michelle chose yoga teacher LT, who showed up in tuxedo briefs sans pants, over JoMarri, who ripped off his suit sleeves for her. Poor JoMarri and his suit! 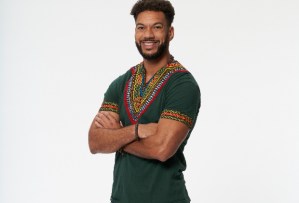 That said, Michelle did make some informed choices when it came to compatibility and chemistry by not ignoring the sparks she had with Jamie, a biotech CEO from San Diego, as well as Clayton, Rodney and dueling firefighters Daniel and PJ. The only choice that seemed shaky was Joe. He’s the real-estate developer from Michelle’s hometown that she had met before on social media but ghosted her. Michelle said she could tell Joe was trying to earn her trust again, but she still wasn’t sure. Smells like drama to us.

What did you think of the Season 18 premiere of The Bachelorette, and which man feels right for Michelle to you? Grade it in our poll, and drop your thoughts in the comments.