This week on NBC’s La Brea, Eve got a blast from her not-so-distant past, the camp investigated an electrifying new threat, and Gavin uncovered new sinkhole secrets.

As the survivors hang out at night, Lucas discovers that his heroin stash is missing just as Scott reveals to Josh and Riley that he buried the bricks after Sam’s spinal procedure — and he doesn’t remember where, since he was stoned at the time. Meanwhile, Eve is opening up to Sam about her and Gavin’s separation when a rumbling in the sky draws everyone’s attention to the aircraft that comes tumbling through the “light” slash. Come morning, Eve, Josh, Scott, Riley and Lucas form a search party that follows the smoke from the crash, just as an anxious Scott realizes that the heroin belonged to a pistol-packing Lucas.

Soon enough, the search party finds a parachute snagged in a tree, after which they hear gunshots. Emerging from the brush (after apparently warding off one critter or another) is Levi. Eve is duly astonished, then gives Josh’s “Uncle Levi” a hug. The group and Levi set out to find his plane — saving Riley from some sort of river serpent along the way! —  only to eventually confirm that one of the engines blew out. But when the plane’s radar detects something about five miles to the south, they decide to make camp for the night and gorge on MREs. Along the way, Lucas learns that Scott took his stash… Eve busts Levi’s chops about ghosting her… and Levi informs Eve that Gavin knows about their affair. Come daybreak, the group finds what the radar had detected: a primitive though by no means prehistoric village….

While the search party was away, the other survivors had to deal with a mysterious attack on a random Red Shirt (named “Eddie,” I think?), which left him with veiny marks all over his body — which Sam later says suggest electrocution. The only witness to what happened/the aftermath was Lily, the young girl who “doesn’t talk,” and though big sis Veronica warns her not to, Lily eventually pipes up to say that she saw an old man with a handprint on his back.

Just then, we see that the village that Eve, Levi et al have stumbled across and are walking into has that recurring handprint logo above its entrance…. (For those with a La Brea/Lost BINGO card, prepare to cover your “Others” square.) 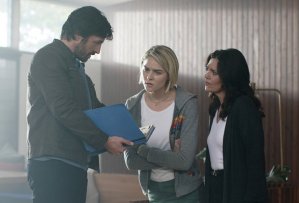 Not long after Eve found Levi, Gavin had a “vision” of that reunion and went to alert Dr. Nathan to Delgado’s survival. Agent Markman, though, said that Nathan had “taken a day,” and also reported that there would be no more flights into the sinkhole, since they seem to cause earthquakes. While poking around Dr. Nathan’s desk, Gavin found a file on him, which included a photo from the October 2018 sinkhole incident — and indicated that Mojave was in fact the fourth discovered sinkhole! Thanks to Izzy’s intrepid Googling, Gavin found the scientist, Dr. Albridge, who was in a 2018 photo with Dr. Nathan, and they trekked out to her horse farm. There, they also found Dr. Nathan, and the two ladies revealed to Gavin a second plane, like Levi’s, but modified to avoid the previous flight’s failures — and they want/need Gavin to pilot it! 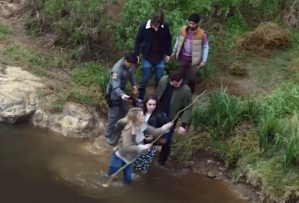 PLUS, SOME QUESTIONS I HAVE ABOUT EPISODE 4….

1) Why did Eve immediately ditch the handy stick she had been using to assess the water’s depth?!

2) Did Riley really go back for seconds? When food will be so scarce, MREs delivery or not?

3) Was anyone else dreading what lie(s) Levi might tell Eve about what’s going on topside with Gavin? And frankly relieved it didn’t go that route?

4) Again, we ask: Where did Eve get the jeans she changed into last week, that happen to fit absolutely perfectly?

5) How does Dr. Albridge have a second next-gen plane ready — complete with modifications to avoid what went wrong in the first mission — not 24 hours after Levi crashed? 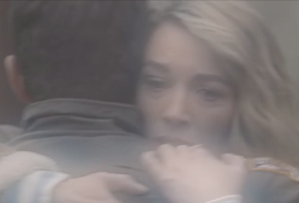 6) Isn’t it funny that Gavin’s “visions” use the exact same camera angles (sometimes even over-the-shoulder!) as the original scenes?

7) Tell me again why not a single car will start up…?

8) Is Traffic Cop resolved to maintain her authority by never changing out of that polyester uniform? Or does she not have access to a magical closet like Eve?

What did you think of the episode “The Arrival”?