If you were worried that Netflix’s live-action Cowboy Bebop wouldn’t be as cool or as stylish as the original… stop worrying.

The streamer has offered us our first look at the reboot — premiering Friday, Nov. 19 — in the form of a new promo dubbed “The Lost Session,” which consists of specially created footage that won’t be seen in the series. Still, it’s a chance to see intergalactic bounty hunters/”cowboys” Spike Spiegel (John Cho), Jet Black (Mustafa Shakir) and Faye Valentine (Daniella Pineda) in action… and “action” is definitely the right word for it. 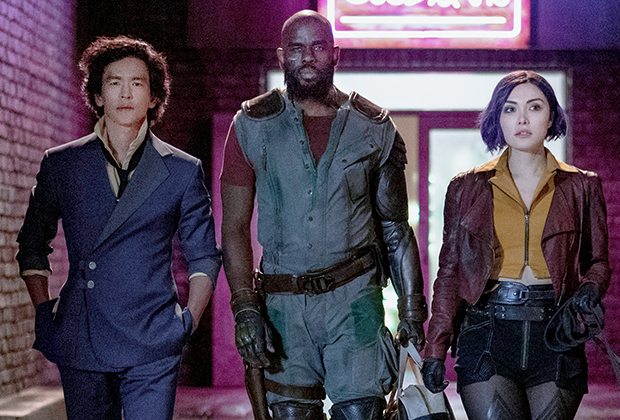 In the promo, which you can watch above, Jet informs his two pals of a new bounty to chase down, and Spike dispatches the target with a gravity-defying somersault kick… only the guy he kicked wasn’t the target. (Oops.) Spike insists on taking a break to grab some noodles from a street vendor, but he’s haunted by visions of a katana-wielding adversary. He quickly snaps back into action, though, helping Jet and Faye clear out a gang of toughs by grabbing a long staff and swinging it in the direction of the bad guys’ skulls. Back on their ship, the bounty hunters bicker about proper tactics (rule number one: never shoot the bounty in the face) — and oh yeah, there are plenty of cool camera angles and squealing jazz notes along the way.

Based on the classic Japanese anime series that found a cult following here in the U.S. on Adult Swim, Cowboy Bebop follows “a scrappy, snarky crew ready to hunt down the solar system’s most dangerous criminals — for the right price,” per the official description. “But they can only kick and quip their way out of so many scuffles before their pasts finally catch up with them.”

Press PLAY above for a sneak peek at Cowboy Bebop, and drop your first impressions in a comment below.