Over and over again, Monday’s episode of The Voice teed up the saddest kind of mic-drop moment — the kind in which a singer’s asked to drop the mic on their way not just off the stage but the show. Along the way, Ariana Grande got goosebumps galore, John Legend retained a purple-haired competitor who reminded him of Pink, Kelly Clarkson stole a 13-year-old dark horse from Ari, and Blake Shelton was left so awestruck by a performance, he remarked, “I don’t know that I’ve ever seen anything like that.” Spoiler alert: It’s the first one up. So enough preamble, let’s recap!

Team Legend: Joshua Vacanti (Grade: A-) defeated Keilah Grace (Grade: B) on “good 4 u” | After the duo ran through their Olivia Rodrigo cover for their coach and mentor Camila Cabello, the latter was sold on the theatricality of Joshua’s delivery. Now I love me some musical-theater, but I don’t necessarily want the Phantom of the Opera singing me Top 40 pop. So I was, let’s say, concerned. On the other hand, I had no worries at all about mini-Paloma Faith Keilah (for whom I was unabashedly rooting). On stage, Joshua’s performance was all over the map, but there was no place that it went that I didn’t want to follow. He was terrific — vocally solid, wonderfully weird and unpredictable, and utterly compelling. My girl Keilah was good, too — very Avril Lavigne — but between the shock of Joshua’s bonkers performance and what John called “the addition sauce” he put on lines here and there, there was no beating him. Bummed, as was Ariana, that she didn’t step in to steal Keilah.

Team Blake: Carson Peters (Grade: B+) defeated Clint Sherman (Grade: B-) on “Don’t Let Our Love Start Slippin’ Away” | In rehearsal, Clint sounded like an old pro, but there was an urgency to Carson’s delivery that turned my ear in his direction. Blake directed Clint to sing more from… Well, it looked like he was saying from Clint’s nasal area. But I suspect he meant for Clint to use his stronger head voice to keep up with Carson. When the spotlight fell on the teammates, they delivered a perfectly delightful rendition of Vince Gill. Clint twisted and shaped notes like a sculptor might clay, but that growl in Carson’s voice, and his intensity, made him the winner in my book (and it turned out, Blake’s). Carson’s was the more memorable vocal. On top of that, as Kelly noted, he’s “17 years old looking like a country Patrick Swayze.” In other words, he stood a great chance of getting whatever part of the teenybopper vote wasn’t comprised of diehard Arianators. 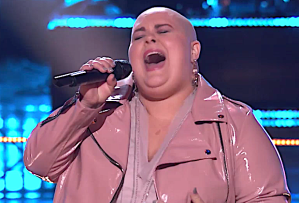 Team Kelly: Holly Forbes (Grade: ???) defeated Wyatt Michael (Grade: ???) on “Sunny” | From the teensy bit of their sing-off that we heard, I probably would’ve leaned toward Wyatt. Yeah, he’s pretty much a Sinatra impersonator, but he’s a good one. And I keep thinking what’s most memorable about Holly might be her look, not her voice.

Team Ariana: Jim and Sasha Allen (Grade: ???) defeated Sophia Bromberg (Grade: ???) on “Signed, Sealed, Delivered, I’m Yours” | Argh, another Battle given the abbreviated treatment. All I really got from the snippet was that I didn’t remember Sophia at all, and Sasha has the infectious energy of a happy puppy dog.

Team Ariana: Raquel Trinidad (Grade: B-) defeated Hailey Mia (Grade: C) on “Car Wash” — Hailey stolen by Kelly | Even before these two started rehearsing, I was ready to call it for 13-year-old wunderkind Hailey, whose Blind I’d liked so much more than Raquel’s. Coach Ari wasn’t satisfied, though, and wanted to hear more of Hailey, not Rose Royce or Christina Aguilera, in her performance. Hailey also seemed to struggle a bit hitting a particular high note. In the moment of truth… eh. First of all, not sure the song selection was the best. Regardless, Hailey occasionally looked and sounded unsure, tentative; perhaps a case of youthful inexperience getting the best of her. She wasn’t bad by any means, she just didn’t bring forth the wow that she has in her. By contrast, Raquel packed a good bit of personality and sass into her more confident performance, allowing her to handily win this sorta tepid Battle. 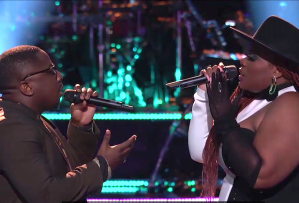 Team Kelly: Gymani (Grade: B-) defeated Aaron Hines (Grade: C+) on “working” | In rehearsal for the Battle of the Four-Chair Turns, Aaron might’ve been quite good, but honestly, I could hardly hear him over Gymani, whose voice is so fantastically big and raw, it just devours every other sound in the room. (Don’t think we’ll ever have to worry about her being audible over the band!) After their run-through, Kelly advised Aaron that he couldn’t just be smooth vocally, he also had to be elevated (which he immediately demonstrated that he could). As for Gymani, for the sake of the competition, Kelly wanted her to ditch her cool low tones on the verse and go high to stand out. When it was go time, eh… this was more flicker than fire. Aaron poured vocal butter all over the stage, which was pleasant enough, but not so interesting or “OMG!” that he could in any way eclipse Gymani, who’s just a powerhouse even when she’s only at half-capacity. I must have been missing what the coaches heard in Aaron that is so remarkable.

Team Legend: Sabrina Dias (Grade: B) defeated Jack Rogan (Grade: B-) on “cardigan” | When this duo first tried on Taylor Swift’s song for size, I gave the edge to Jack. Purple-locked Sabrina sounded nicely emotional, but there’s something shadowy and enticing about Jack’s voice. Like, if dusk had a sound, his voice might be it. Afterwards, John challenged Jack to go up an octave on a harmony, and Camila encouraged Sabrina not to use all of her vocal power all the time — build up to that. On stage… damn. This was a toughie. I preferred Jack’s chill presence to the way Sabrina overacted and pantomimed so many lines, but overall, her vocal was the better of the two — maybe because notes that came easily to her were such a strain for Jack that they made him sound yelly-er than was ideal. Sad to see him go. 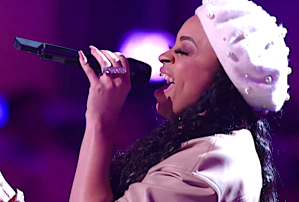 Team Legend: Shadale (Grade: ???) defeated Janora Brown (Grade: ???) on “One Last Time” | In yet another abbreviated Battle, Shadale did what I think we all expected her to and emerged victorious. She sounded a smidgen uneven in the snippet we heard, but John couldn’t resist her “Beyonce Jr.” vibe and star quality.

Team Blake: Wendy Moten (Grade: A+) defeated Manny Keith (Grade: A-) on “If I Ever Lose My Faith in You” — Manny stolen by Ariana | Before entering the rehearsal room, Manny asked Wendy how weird it would be if the pro singer actually knew their mentor. And whad’ya know? She’d just sung with Dierks Bentley a coupla weeks earlier. Once that non-introduction was complete, the competitors ran through their Sting cover — sounded pretty great, too — and Blake advised Manny not to let insecurity rush him. For Wendy’s part, she had to remember to own the song, she wasn’t singing backup anymore. On stage, the teammates were a disjointed study in contrasts. Whereas smiley Manny twirled and bopped all over the place, Wendy was very still, very regal — presence personified. And every time she opened her mouth, she blew him away without, it seemed, even having to try. (At one point, I could’ve sworn she literally repelled him with the power of her voice.) Manny may have overdone the ultra-cheerful dancing, but he was really good. Trouble was, with him up against Wendy, this was no Battle, it was a massacre. It’s not for nothing that Wendy left Ariana with “goosebumps everywhere.”

So, who not only razzled but also dazzled you Monday night? Vote for the performer who you think gave the best performance below, then hit the comments with your reviews.