Guilt is the overriding emotion that drives Jiwoo to seek revenge when her gangster father is murdered in Netflix’s gritty new K-drama My Name.

Jiwoo feels like if she hadn’t angrily told her father Donghoon that he was dead to her in the premiere, he wouldn’t have come out of hiding to redeem himself and celebrate her birthday with her. The moment he snuck into their apartment building, he was doomed because the killer was waiting for him in the shadows. He tried to open the apartment door but couldn’t. Jiwoo had put on the safety lock and wasn’t expecting him. Donghoon was trapped, and the killer took advantage.

Despite staring down his own death, Donghoon died attempting to protect his naïve teenage daughter, who kept trying to open the door to save her dad. First, he held on to the doorknob, and then he broke off the key in the lock, all to protect Jiwoo. The killer shot Donghoon in cold blood and ran away.  Donghoon apologized for putting Jiwoo in this position in the first place because of his shady job, and then he died before Jiwoo could get the door open. She sobbed and held him in her arms, but it was too late. He was gone. And Donghoon’s job, which had once brought shame upon Jiwoo, didn’t matter anymore because he had passed away. (Try telling that to the high school bullies she beat up.) 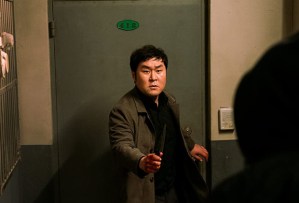 A heartbroken and shell-shocked Jiwoo turned to the police, but they were no help. Most of their energy had gone into capturing him alive, and when an unidentified man snuffed out his life, the authorities all but wrote it off as collateral damage. After all, the cops were way more interested in Mujin Choi, Donghoon’s crime boss and best friend. Jiwoo was also interested in him, and when police detectives failed to do their job, she turned to Mujin to help her seek justice and vengeance.

Mujin initially turned Jiwoo away, but after she attempted to find answers on her own and was nearly raped and killed as a result, Mujin stepped in, exterminated the would-be rapists, and took Jiwoo under his wing. Jiwoo became a part of Mujin’s martial arts fighting gym, and he even trained her himself by teaching her all of the vital parts of men she could attack to defeat them. Besides, as Mujin reasoned, if Jiwoo really wanted to avenge her father’s murder, she had to be in fighting shape.

By the end of the installment, all of Mujin’s henchmen in training fought in a battle royale of sorts, but ultimately, only two remained — Gang-Jae and Jiwoo. The winner would walk away with a ton of cash, but most importantly, Mujin’s respect.

What did you think of the My Name premiere? Grade the edgy K-drama’s first installment in our poll, and drop your thoughts in the comments.