Monday’s episode of Dancing With the Stars can only be described as systematic, hydromatic, and y’know what, while we’re at it? Ultramatic, too.

The ABC competition traded in Mickey Mouse ears for Pink Ladies jackets on Week 5, in celebration of the movie musical Grease. And since we’re about halfway through the competition, it seems about time for a shocking elimination, which went down at the end of the broadcast.

Olivia Jade and pro Val Chmerkovskiy (Foxtrot to “Summer Nights,” pictured): The downside of these Grease homages is that the songs didn’t always quite suit the styles given to our contestants, resulting in a routine like Olivia and Val’s foxtrot/Broadway hybrid. Olivia’s dancing, per usual, was impressive; I’m just not sure the non-foxtrot interludes, like Olivia and Val’s separate combinations with the male and female troupe members, accentuated her strengths. Judges’ Score: 36/40

Melora Hardin and pro Artem Chigvintsev (Viennese Waltz to “Look At Me I’m Sandra Dee”): Melora brought some delightful sass to this performance, but I was admittedly hoping she’d get even feistier, particularly on those “I don’t drink, or swear, I don’t rat my hair” lyrics. That said, Melora is one of the few remaining contestants whose grasp on the choreography is rarely in question, and it’s lovely to watch her glide through the movements so gracefully each week. Judges’ Score: 36/40

Iman Shumpert and pro Daniella Karagach (Viennese Waltz to “Hopelessly Devoted to You”): As it’s done with every other pro basketball player to compete on DWTS, the height difference is getting increasingly tricky for Iman and Daniella, particularly in a style like the Viennese waltz that exposes their frame errors so clearly. But Iman did infuse this number with a really compelling sensitivity and softness, which juuust needs to reach his face now; dude is looking bored out there a lot of the time. Judges’ Score: 28/40

The Miz and pro Witney Carson (Jive to “Greased Lightning”): Confession: I spent most of this jive imagining how killer it’d be with one of Witney’s stronger former partners. I’m sorry, The Miz! (…But Milo Manheim doing that section during the instrumental break? A dream!) Anyway, here in reality, The Miz brought oodles of enthusiasm to this jive, but it tipped over into chaos often. Judges’ Score: 32/40

Amanda Kloots and pro Alan Bersten (Viennese Waltz to “Beauty School Dropout”): As enjoyable as it was to have Frankie Avalon perform “Beauty School Dropout” live for this routine, I don’t think it did Amanda and Alan any favors, as the question of whether they could match Frankie’s ever-changing pace loomed over most of the number. Amanda, of course, is a divine dancer, and her extensions were stunning here — but I have to agree with Derek Hough that there’s been a slight disconnect in Amanda’s performances thus far, where the emotional depth isn’t quite matching her skill with the steps. Judges’ Score: 39/40

Suni Lee and pro Sasha Farber (Charleston to “Born to Hand Jive”): I did not expect such attitude from Suni-as-Cha-Cha-DiGregorio, but I loved it so much. Could she have brought even more? Of course! But the growth she showcased during this Charleston was terrific, and kudos to Sasha for limiting the gymnastics tricks that he easily could have packed into this performance. Judges’ Score: 36/40

Jimmie Allen and pro Emma Slater (Foxtrot to “Sandy”): Someone! Tell! Jimmie! To stop! Singing! Along! I was sincerely stunned that not a single judge commented on Jimmie’s lip-syncing throughout the entire performance, which happened during last week’s Mulan-themed routine, but is evidently becoming a habit. As refined and confident as Jimmie’s movements are, the singing takes away his ability to emote from his face, which would have been great to see during this vulnerable number. Judges’ Score: 34/40 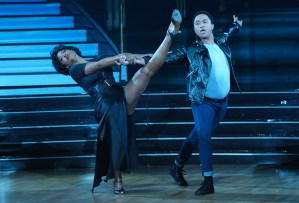 Kenya Moore and pro Brandon Armstrong (Rumba to “There Are Worse Things I Could Do,” pictured): It’s tough to assess how well Kenya is remembering and executing choreography on her own, with Brandon still visibly coaching her through most of the movements during the live shows. But if the assists are allowing Kenya to move as fluidly and beautifully as she did in this rumba, then the assists stay! Judges’ Score: 36/40

JoJo Siwa and pro Jenna Johnson (Foxtrot to “Look at Me I’m Sandra Dee (Reprise)”): I’ve found myself unexpectedly emotional at several of JoJo’s routines this season, but none more than this foxtrot, in which JoJo conveyed everything from heartache to full-blown jubilation. Every step was so delicately done, and JoJo’s wide-eyed expression as she performed that opening solo set the perfect tone. What a joy. Judges’ Score: 40/40 — the first perfect score of the season!

Mel C and pro Gleb Savchenko (Quickstep to “You’re the One That I Want”): Gleb’s incorporation of moves from this scene in the Grease movie was fun, but ultimately a bit of a momentum killer for this quickstep, which already felt a bit slow. Judges’ Score: 36/40

Cody Rigsby and pro Cheryl Burke (Quickstep to “We Go Together”): I’m still trying to figure out what’s not quite connecting about Cody and Cheryl’s performances: Perhaps it’s Cody’s height, as he could stand to get a bit lower in his knees, or his tendency to turn on an “I’m performing now!” smile whenever the music starts. But I’m glad they’re getting more time to work out those kinks, because, gah! They could be so good! Judges’ Score: 32/40

And now, the extremely puzzling results:

SAVED BY JUDGES
Olivia Jade and pro Val Chmerkovskiy (saved by Derek and Len, the latter of whom automatically breaks a tie as head judge)

Not exactly the ending to Grease Night that we expected, eh? Drop a comment below with your full thoughts on Monday’s episode!