It’s a new season and a fresh new start for Hightown’s Jackie Quiñones.

She’s 50 days sober, happy and regularly attending her AA meetings. Though she’s made a lot of progress, she’s still coping with Junior’s death and laments not doing more to help him.

Determined to catch Frankie, who was released from prison at the end of last season, Jackie starts working the case on her own time. However, buying drugs from a dealer in the hopes of securing a warrant is not the right approach in Alan’s eyes despite what she learned from Ray. He’s quick to remind her that she’s only a liaison for one day away (and on call if they need help searching women suspects) and brushes off her attempts to be more involved with the force.

Leslie Babcock, the only other woman in the unit, advises Jackie to build a case first and even invites her to ride along when they investigate a new murder. 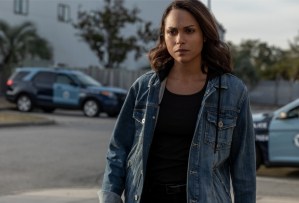 Meanwhile, Ray is a mess and fantasizing about Renee. He’s living in his basement while renting out the upstairs portion and attending mandated therapy sessions to work through his sex addiction issues. Desperate to get his job back, Ray begs for a recommendation to his bosses, but his therapist insists on continuing their sessions instead.

Frankie is happy to see his cousin Jorge out, but not everyone feels that way. Jorge immediately rubs Renee the wrong way by making lewd comments about Ray and later, snide remarks about her wearing white while she tries on a wedding dress. Unfortunately for Renee, she may end up having to work closely with him. Frankie wants her to return to the club as assistant manager while Jorge serves as manager, but Renee just wants a normal life.

Elsewhere, Alan visits an injured Osito, who’s been released from the hospital and admitted to prison for shooting Jackie. The guards have it in for him because he shot a cop, and he requests to be transferred to a less severe unit to serve out his time. Alan will only do so if Osito can provide quality intel.

Jackie hits up Ray, who’s working at a bar, and he warns her to watch out for Leslie because she will “stab you in the back.” At a reinstatement hearing, Ray says all the right words. He admits his relationship with Renee was not consensual given his position of power and makes sure to come across as remorseful. With Jackie as his character witness, it looks like he might actually get his job back. But a member of the review board drops a surprise witness in Captain Jones, who recalls the time Ray sent d—k pics to Jones’ wife in 2013. Suffice it to say, Ray does not get reinstated. 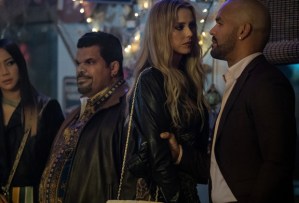 Jackie is called to a nice house in the suburbs where three kids from affluent families were found dead after overdosing on a powerful new drug called the Great White. The case attracts major media attention and a distraught mother lashes out at the police for being useless in front of a swarm of cameras. It’s not a good look for the department. Jackie uses this as an opportunity to approach the lieutenant about joining the force full time, even suggesting that she ride with Leslie. Jackie’s persuasive pitch gets her approved for a three-month probationary period.

The episode ends in irony: Jackie and Leslie talking about putting away Franke and Jorge while Jorge begins the journey back home after securing a meeting to sell Great White. They unknowingly pass each other on the road — a sign that their paths will likely cross again.

How did you feel about Hightown’s Season 2 opener? Grade the premiere below and sound off in the comments.