In the Season 7 premiere of Fear the Walking Dead, Strand leaned so hard into his rediscovered villainy that it was a wonder he didn’t tip over. (And holy crap, did human charisma machine Colman Domingo play it to the hilt; he savored every self-satisfied line as much as his character did his confidence.) It took a minute to get to Victor, though…

First, “The Beacon” introduced us to Will (Dickinson vet Gus Halper), a woebegone twentysomething who looked just about ready to serve himself to a walker when he was apprehended by Strand’s henchmen and introduced to the blinged-out new king of the world. Since Teddy’s big blowup, Victor had turned the tower that he shared with Howard into a chic retreat, complete with a rooftop garden, art gallery, yoga classes and, based on the meal Will was served, an Olive Garden. And the young man could stay, Strand said, if he proved to be “of value.” (Crib from Virginia much, Vic?)

Immediately, Will blew his chance by questioning Strand’s self-assuredness. But then the newcomer snatched it right back by offering to show his majesty where he’d gotten the St. Christopher medal that Victor had given Alicia. Along the way, we learned more about Will, like that he’d only left the settlement where’s he’d hunkered down with the senator to whom he’d been an aide because he got kicked out. Ever since, he’d been trying to make amends.

“Don’t spend a moment trying to make things right,” scoffed Strand, all but sprouting devil’s horns. “Focus on showing them they were wrong.” 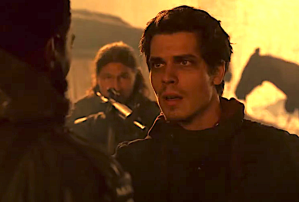 As Strand, his men and Will took shelter from nuclear rain under the bridge that the newbie called home, he accidentally revealed that he knew Alicia… just as they were attacked by what he called Stalkers, who looked like the sand people from Star Wars and apparently went around stripping the dead. In the end, Strand’s men were killed, Will was shot in the leg, and having spotted a clue that Alicia was at the Franklin Hotel, Victor had left him behind to seek out his old friend.

At a lighthouse — because why not? — Will, bum leg be damned, caught up with Victor and at gunpoint explained that he’d been testing Strand to see if he was worth saving. He and the senator’s crew had been holed up at the Franklin when Teddy’s scouts killed everyone. Well, everyone but him. (He’d been able to hide.) Then he’d gotten locked in with Alicia and the rest of the cultists. So why had she kicked him out? He’d refused to do something that would’ve protected everyone except for her. Bringing her Victor, he thought, might make amends. But “I doubt she would even recognize you” now, Will said

As if to prove the point, Strand attacked Will, who froze at the door rather than run for it. Was he scared of the walkers in the fog? No, they were the Franklin gang reanimated. For a hot minute, Will and Strand worked together to get the light going, and even saved one another in the fog. Since Alicia wasn’t among the walkers, they next made haste to the Franklin, where they found a note from her to Will. “Padre” was all it said. Who’s that? It might not even be a who, Will explained. And “it might not even exist.” (Tales from the cryptic.)

By and by, Victor deduced that Will had loved Alicia. Strand had, too. Maybe, they but mostly Will decided, they were supposed to find her together — or let her find them. To that end, they hauled the light back to the roof of the tower, where it immediately began drawing walkers. Will assured Victor that not only would Alicia find them, she’d be able to help him once again be the man that he was. Only he was far too pleased with this version of himself to want that. Besides, “she won’t have anything to do with me after this.” 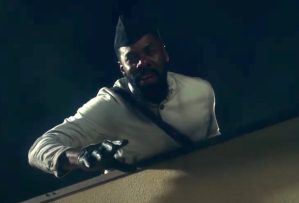 After what now? Oooh, after Victor shoved Will off the roof. (Dang it, I liked Will.) Alone at last, Howard noted that the beacon would draw more than walkers — it might even catch Morgan’s eye. “I’m not worried about him or anyone else,” snickered Victor. “Anyone who tries to get to me is gonna have to get through them” — in other words, the barricade of walkers that was forming around the tower.

So, what did you think of the Season 7 premiere? Bad Victor is extremely good Victor, no? Was anyone else sorry to see Will dispatched so quickly? On your way to the comments, grade the episode in the poll below.