An agreement between the International Alliance of Theatrical Stage Employees (IATSE) and the Alliance of Motion Picture and Television Producers (AMPTP) was reached Saturday, preventing the union’s industry-wide TV and film strike that was formerly set to begin Monday, our sister site Deadline first reported.

The new three-year contract — which will still need to be ratified by the union’s members — comes mere hours before the the union’s midnight Sunday deadline, which was imposed by IATSE president Matthew Loeb. A source close to the negotiations reportedly called the agreement “a fair deal for everyone concerned.”

“Everything achieved was because you, the members, stood up and gave us the power to change the course of these negotiations,” Loeb and the leaders of the union’s 13 Hollywood production locals said in a statement. “Our solidarity, at both the leadership and rank and file level, was the primary reason that no local was left behind and every priority was addressed.”

IATSE listed the takeaways as such: 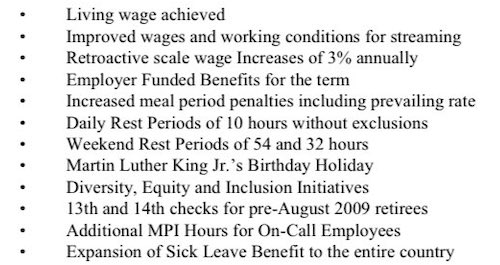 Hollywood will be heading back to work on Monday, while union members will head to the ballot box “in the next few days” to accept or refuse today’s deal.

IATSE had set a deadline of 12:01 am PT Monday, Oct. 18 for a walkout, if an agreement wasn’t reached on a new three-year film and TV contract. Some 60,000 IATSE members were planning to engage in the strike action that would’ve shut down TV and film productions in the U.S.

On Friday, union officials cautioned members from getting their hopes up, and in an email to its members wrote, “Even though we are still at the bargaining table trying to get an agreement, at the time of this writing, there are no plans to call off the strike.”

Seeking “change that is long overdue in this industry,” IATSE was looking to address “the most grievous problems” in workplaces, including excessively unsafe and harmful working hours; unlivable wages for the lowest paid crafts; consistent failure to provide reasonable rest during meal breaks, between workdays, and on weekends; and the fact that workers on certain “new media” (streaming) projects get paid less, even on productions with budgets that rival or exceed those of traditional “blockbusters.”

“The explosion of streaming combined with the pandemic has elevated and aggravated working conditions, bringing 60,000 behind-the-scenes workers covered by these contracts to a breaking point,” IATSE said in a statement, as the vote to strike if needed loomed. “We risked our health and safety all year, working through the pandemic to ensure that our business emerged intact. Now, we cannot and will not accept a deal that leaves us with an unsustainable outcome.”