When Hightown returns for Season 2, Jackie will have one less thing holding her back.

Season 1 ended with her DUI charges officially dropped, allowing the National Marine Fisheries Service agent to move forward with her life and focus on staying sober. The new season, which premieres this Sunday at 9/8c on Starz, will see her determined to make the best of her second chance as she takes on the emerging crisis of a lethal new drug, called the Great White, sweeping through the Cape.

“The Great White plays a big piece of the puzzle in Season 2 and that’s being sold by Frankie’s guys,” Monica Raymund, who plays Jackie, tells TVLine. “That’s all around, and we see what the repercussions are with that. She finds herself in the midst of all of these temptations, and she’s holding onto her sobriety because she’s happier when she’s sober.”

“She has finally found her purpose in trying to do good in the world by putting away these bad guys,” Raymund continues. “At the beginning of the season, it’s a big reason why she wants to stay sober. But then as we continue through the season, we see that obsession of the mind start to flare up again.” 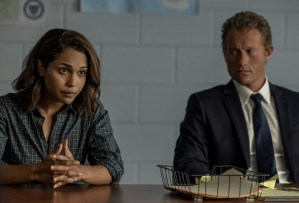 Dohn Norwood, who plays Alan, notes that his character’s decision to help Jackie is an opportunity to “show her the right way to do things” after being so heavily influenced by Ray. Whether Jackie follows his lead, though, remains to be seen. She’ll have a lot on her plate this season, especially when her father also comes waltzing back into her life.

“The question becomes, how does Jackie navigate all of that and try to honor her sobriety at the same time? That’s really where things get a little rocky,” Raymund teases.

Things are already rocky for Ray, who’s been suspended from the police force after Renee accused him of sexual assault. The disgraced cop begins Season 2 feeling lost and searching for an outlet. “Ray’s living in his basement, he thinks he’s hit rock bottom,” his portrayer James Badge Dale explains. “Unfortunately, in life, what you think is rock bottom might not be. There is this lifeforce in him that is this juxtaposition where he’s as dark as he can get, emotionally, with depression, [but] there’s still this other thing inside him that’s pushing him forward.”

“He never stopped moving to really look at himself, and he really used work and the pursuit of Frankie to just stay busy and [not] look deep,” series creator and showrunner Rebecca Cutter adds. “Not having that is really tough for him, and he tries a lot of different things to fill that hole. He tries new romance, he tries going back to some family, and ultimately, he realizes nothing’s going to work for him like making the case.” 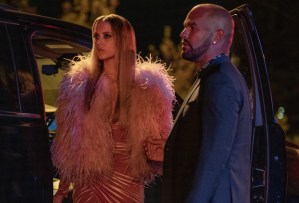 Making the case will be much more difficult now that Frankie has been released from prison. Amaury Nolasco, who plays Frankie, says the newly freed drug dealer “comes out to claim what’s his,” including his lover Renee and growing drug empire.

Renee, meanwhile, will live in luxury after choosing Frankie, who is the father of her child, over Ray. “She’s happy with her decision,” Riley Voelkel says. “She’s living the high class life, and he’s giving her seemingly what she wants.” But when Frankie’s cousin Jorge (played by Luis Guzmán) comes into the picture, it “introduces another level of chaos and violence. It’s just a reminder for her like, ‘Is this the better life for me and my son? Did I make the right decision?'”

“This is how Latino families are. It’s like we can’t say no — family comes first,” Nolasco says of Frankie’s relationship with Jorge. “He’s more of a loose cannon than Frankie is so I am the one who has say, ‘Listen, let’s think this through.’ He just wants to shoot from the hip, [and is] also creating a little bit of distrust in my relationship with Renee.”

That doesn’t necessarily mean Jorge’s attempts to derail Renee will work. “Last season, Renee was a little bit of a pawn in the game… This season, she’s really a game player so don’t underestimate Renee,” Voelkel warns.