Jumping back into the ring full-time after seven years away is a shock to the system — and CM Punk knows it. This Friday on AEW Rampage (airing at 10/9c on TNT), he is set to take on Matt Sydal, whom he last wrestled about a decade ago when they were both working for the WWE.

For Punk, whose first three AEW matches were against wrestlers he’d never fought before (Darby Allin, Powerhouse Hobbs and Daniel Garcia), Sydal is familiar territory. Their singles match is an opportunity for Punk to see how much wear-and-tear he’s undergone from an in-ring career that spans more than a decade and a half.

“It’s a good litmus test to see if I can still hang, because I have a history with him,” Punk tells TVLine. “I do believe he’s been one of the most underrated guys over the past 10 to 15 years in wrestling and it’s going to be fun to get in there with somebody who’s familiar for the first time since I’ve been back.” 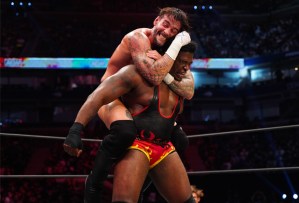 Punk returned from retirement with the Aug. 20 episode of Rampage and announced that he wanted to work with young talent, like Sting protégée Darby Allin. Though focused on his own matches, the in-ring vet is happy to pass his knowledge onto the younger generation whenever he can.

“It’s up to them if they want to listen, and I very much preface almost everything I talk about with, ‘There’s no one right way to do it,'” he shares.  “I came up with everybody telling me that there was one right way and it was their way, and if you didn’t do it, you piss somebody off. But I’m more like, ‘Here’s a good way. It’s proven. I’ve tested it.’ If you have a different perspective, I view it all as art. Some people like Pollock, some people like Picasso, some are into Van Gogh, some like stick figures. I think there’s room for everything…

“I would say that I’m the professor that perhaps teaches at this college,” he adds. “There are also other professors that teach other things.”

AEW’s locker room is filled with other veterans like Bryan Danielson and Christian Cage, with whom Punk previously worked in the WWE. Punk finds it helpful that he’s not the only vet there, and that AEW’s rising stars can benefit from seeing different perspectives.

“Me and [Christian] are pretty like-minded where, instead of trying to clip somebody’s wings, we want them to soar as high as they can,” he says. “I do think trial and error is a big thing. You have to f—k up and you have to make mistakes. It’s how you learn. So instead of us being like, ‘I told you so’ it’s more of a nurturing, ‘Maybe next time try it the way I suggested, or the way Christian suggested, or the way Bryan Danielson suggested.'” Punk also makes it clear that “nobody’s back there barking orders at anybody.” 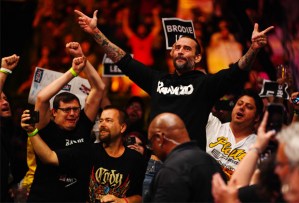 Wrestling has changed dramatically since Punk’s retirement in 2014. It’s more inclusive with stars like the small but mighty Jungle Boy and trans wrecking ball Nyla Rose receiving big, in-ring opportunities they likely wouldn’t have enjoyed even five years ago. AEW has adopted a policy of inclusivity that celebrates “all of our athletes, and all of our fans, regardless of their sexual orientation, race, gender, religion or ethnicity,” according to CBO and wrestler Brandi Rhodes, and that also sets the tone for a more welcoming backstage environment.

“I think pro wrestling has always been this thing where everybody’s a tough guy on TV and normally, the ones who bark about how tough they are are the tough ones. It’s always been more about power and control backstage and people afraid of their spots,” Punk ventures. “I’m coming into this knowing that there’s only one CM Punk. Nobody can take CM Punk’s spot… and in this locker room, I truly believe nobody wants CM Punk’s spot. I don’t want Bryan Danielson’s spot. I couldn’t be Bryan Danielson, and I couldn’t take Bryan Danielson’s spot. I want everybody to flourish and do their own thing. Me being gone for seven years… what I’ve done definitely puts me in a special place, and I’m not going to abuse that power.”

Punk is quick to deflect the attention from himself (“I’d rather talk about other people’s matches”) and hype up others on Friday’s Rampage card, which includes Danielson going up against Minoru Suzuki. Punk fully intends to kick back and watch the bout, which he calls Friday’s biggest match, live from the arena. The simplicity in just enjoying something he loves is what Punk hopes wrestling fans can also take heed.

“If there was a bummer thing about me coming back, it’s the strange tribalism I see when fans are concerned about ratings and all this other stuff,” he notes. “When I was a kid, I thought Chopping Mall was the greatest movie of all time because I just liked it and it was awesome. I didn’t care what the critics said about it, and I didn’t care if my neighbor liked it.”

“I just think people need to just lose themselves more in stuff they like… You don’t need to make fun of anybody else for liking something that maybe is not for you or you don’t understand,” he says. “So, Friday night, I just think wrestling fans need to just be wrestling fans. Wyle out, sit down, watch one show, watch both shows, watch no shows. I’m a Cubs fan [and] I’m a Blackhawks fan and trust me, nobody hates the Cubs or the Blackhawks more than Cubs and Blackhawks fans. I’ve seen that in wrestling and it’s just so strange to me.”