It was a tough lesson learned by the Ua tribe’s JD Robinson, who became the fifth person voted out of Survivor 41 Wednesday after he trusted tribemate Shan (again!) with possession of his extra vote advantage. Despite saying, “You’re not gonna fool me twice” directly to the camera, that’s exactly what the Mafia pastor did, as she clutched JD’s extra vote with one hand, and wrote his name down with the other. (Click here for a full recap.)

So why did he think his “Hail Mary” play would work a second time, and what exactly was his relationship like with the super-sneaky Shan? Read on for his take on Episode 4, and find out what he would do differently if given a second chance.

TVLINE | How did it feel reliving your vote-out last night?
JD ROBINSON | I feel awful about it today, but I’m content. Rewatching it was pretty hard. There were so many instances where I’m like, “Ugh, I’m so close to safety! I’m one ring, one money shot away from potentially being safe.” Maybe if I would’ve lobbied harder at Tribal and still had my extra vote I could’ve been able to maybe pull something off, but even then, I don’t know.

TVLINE | Walk me through both your relationship with Shan, and also the decision to hand over your advantage again.
Shan and I got close on Day 1. We had a really long talk about our lives. We have really similar faith, so we bonded on that. Everybody was like, “Oh, they’re a brother/sister duo,” and Shan was always like, “Oh, JD’s family.” That was our relationship. However, me giving her my extra vote was not based too much on relationship and emotion. I gave my extra vote to Shan almost out of necessity. It was a Hail Mary. It was the only play I had. Originally, I didn’t want to give it to her. I wanted to vote out Ricard with Brad and Genie that first time, but Brad wouldn’t even speak to me. The only option I had was to try to buy some loyalty with Shan and try to get the person in power — I saw that Shan was in power the entire time — to want to work with me. 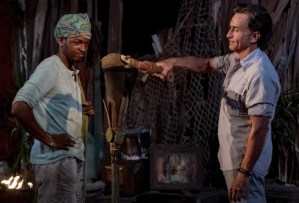 TVLINE | Did you have any inkling that Shan might pull a fast one on you?
Yeah, they didn’t show it, but literally in that conversation where she’s trying to get my extra vote, I was like, “Are you trying to Black Widow me?” I literally asked that, and she was so offended by it. But I was like, “Are you really trying to hit me with the Cirie Fields right now?” I asked her that point blank! There was a 100 percent chance that she could be voting me out, and contrary to what people may believe, I’m pretty sure I was going home at that Tribal anyway, even if I didn’t give her my extra vote. That was me trying to make a play that was going to keep me in the game. I originally wanted to vote out Ricard with Genie with my extra vote, but Genie wasn’t down. So I had to put all my chips in this basket with Shan. I had to convince her that I was with her, and she played me! Good on her. It was a good move. She got me.

I did not want to work with Shan and Ricard. I know it looks like it, but I had so many confessionals where I was like, “Get me out of here! They’re using me as a puppet. I don’t want to play with them!” I wanted to flip it on them so many times. Brad and Genie didn’t really want to do the strategy aspect of the game, so the only option I had was to fit in good with the Boston Rob, with the Mafia pastor. I had no other choice.

TVLINE | Did your relationship not hold up after the show?
We actually have not talked. It’s OK. We’re not obligated to be like, “Ah, besties!” after the show is over. She’s great at the game of Survivor, but still screwed me over pretty heavily. 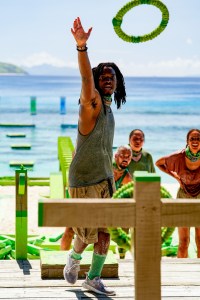 TVLINE | I loved that you stood up for yourself once you learned Shan knew about Brad’s advantage. When did you first realize she was a huge threat?
Sara and I had a huge conversation on the beach about Shan [on the day she went home]. We were like, “Shan is the most powerful player in this game.” But if we tried to pull something against her, we were going to go home because she had all of these connections. She had me, Brad as her No. 1, (and Genie and Brad were buy one-get one half off) and she had Ricard as her No. 1. I even say in my confessional: “Shan is playing the best game.” I said that so many times. I saw Shan as this huge threat. I just wanted to get out of Ua, so I could get rid of the chick because nobody on Ua wanted to.

TVLINE | You spoke a lot about how the show gave you confidence as a young kid. What would you say Survivor has given you now that you’ve crossed over from viewer to castaway?
I’m so thankful to all of the cast, all the crew, to Jeff Probst. I’m so thankful to have the experience. Out there you get so much self-reflection. When you’re not tied to everything going on back home, the people out there are a mirror for yourself. What they perceive you as is how you really are. That’s me fully naked, exposed to all these people. I talked about being taken back to when I was bullied and stuff, and I learned that I’m still a little insecure, and that’s OK. I think that’s a big thing I’ll take away from it.

I did a lot of over-compensating out there. Every time I looked bad or didn’t quite do as well as I wanted to, I would be like, “Well, I can do this or that, and I can be better next time.” That’s an important thing to have out there, that self-confidence. That’s something that I’ll take away from the game.

TVLINE | Let’s say there’s another Second Chance season. Would you play again, and if so, what would you do differently?
I would do absolutely anything to be back out there. If they said, “JD, we’re filming a new season right now, go outside barefoot and we’ll pick you up,” I’m going outside barefoot. The big thing people saw in the pre-game interviews was that I had all of these things, I just had to put them together, but the problem was I couldn’t execute that. To all the fans who thought I would be really good, I promise it’s in me. I just couldn’t get it done.

What I would do differently is definitely settle down on the whole “superfan” thing. I do think that contributed to me being targeted. I looked to the future so much in the game, like “I’m gonna do this with my extra vote! And I’m gonna do that!” I was never in the present. In the present, maybe I wouldn’t have been caught with my pants down, literally. If I was in the present, maybe I could’ve made better relationships. Maybe I could’ve gotten Brad back to my side. I let my superfan-dom get ahead of me. And so coming back, I want to be in the present. That’s what I want to do if I have that chance.