A group challenge on the first episode of a new Project Runway season? What could possibly go wrong? 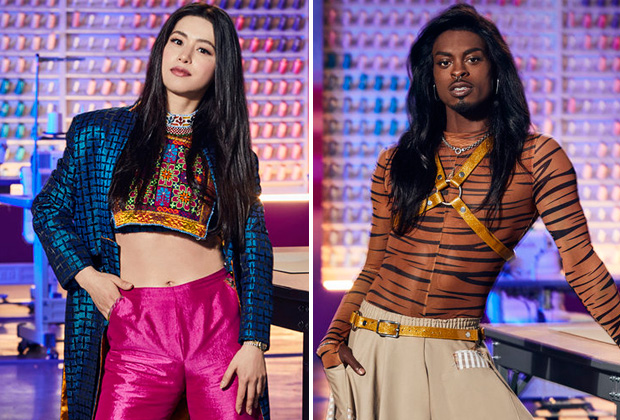 Sixteen new designers (click here for a closer look at each one!) assembled at New York City’s Lincoln Center on Thursday to receive their first assignment from host Christian Siriano, and no one was particularly thrilled to hear that their future in the competition depended on how well they worked with a bunch of strangers.

Speaking of not being thrilled, this feels like a good time to remind you that Karlie Kloss — who has served as the show’s host for the past two seasons — had to sit most of this one out, but she is expected to make “guest appearances” throughout the season.

OK, back to business: Inspired by the city’s bold reopening, each team was tasked with making “a cohesive collection of eight monochromatic high fashion runway looks celebrating color.”

Team Warm got off to a pretty hopeful start, with all eight designers planning to meet midway through their trip to Mood to make sure they were buying cohesive fabrics. It was a solid plan… and it would have been even better if everyone actually stuck to it. Poor Bones, we could all feel his stress as he attempted to make the best of a chaotic situation.

Team Cool also sent up a few red flags early on, starting with confusion of what its overall theme was going to be. The flowers-vs.-bows debate can best be summed up by this line of concern from Caycee: “Not only do we have different tastes, but we have different concepts of what that means and how we communicate it.” In other words, Team Cool was screwed.

Following a surprisingly emotional runway show — the first live fashion event that judge Nina Garcia had attended in over a year — Warm was announced as the winning team, sending the members of Team Cool into a panic, as one of them would be getting the boot.

Of the top three looks pulled from Team Warm’s collection, two of them were done by Bones; there was his own look — a celebration of the Black female form — as well as Darren’s last-minute gold dress that Bones basically did for him. Octavio also enjoyed a moment in the spotlight as the judges praised his red satin design. Unsurprisingly (and extremely deservedly), the first win of Season 19 went to Bones.

Rather than letting his big win give him a big head, Bones remained humble and focused on the overall success of his team. “I’m very happy to be able to see my team on top,” he said. “I’m also very happy to be able to see Darren get this second opportunity because, if he hadn’t had that garment, we would have all been in the bottom. It feels great to be felt and to be seen by the judges. It’s more than words can even express.”

But just as the premiere gave us some early frontrunners for the season, we also had our first designers end up in the bottom three. Sabrina was in tears as the judges read her ruffly gown for filth; Caycee was told that “poor design choices” resulted in a dress that was deemed “unfinished”; and Chastity was told that her look was “poorly constructed and unimaginative.” (Ouch.) In the end, one designer had to go first — and that was Caycee.

“I understand why I was eliminated, my garments weren’t finished,” she said on her way out. “I just wish I could have shown more of me. That’s the part that’s hardest. This experience has opened my minds to what visions I could create moving forward that I haven’t yet brought to life. I just didn’t get to show who I was. Who I am.”

Do you think the right designer got the boot first? And which contestant(s) are you already rooting for in the competition? Weigh in via our polls below, then drop a comment with your full review of the premiere.