Cleo remained a hot commodity on Thursday’s Legacies premiere, with both Malivore and the Super Squad stopping at nothing to rescue her and/or use her for inspiration to defeat the other. Whichever came first.

The wayward muse’s journey through the bowels of Malivore brought her to an alternate reality modeled after her home village, complete with her mother, her sisters and even her little frog friend. She regaled them with stories about how she’s been inspiring people all over the world, and everything felt right… until Hope and MG snuck into Malivore’s head and crashed the Sowande family reunion. Like a Real Housewives dinner party from hell, the meal immediately went from zero to down-in-flames, with Hope poking holes at the fabricated world until they were were all transported back to the endless darkness.

All of this activity earned the attention of Malivore, who kidnapped Cleo before putting Hope through a little test. He sent her back to the night that Landon’s phoenix powers were activated, offering her a chance to rescue him, so long as she agreed to leave MG bleeding out in the woods. Malivore was certain that she’d take the deal, opting to rescue Landon like she always does, but she surprised him by staying to heal MG.

“I was really excited to see that,” Danielle Rose Russell (aka Hope) tells TVLine. “It’s such a small moment, but it really says a lot about where she is, how much she’s grown and how selfless she’s become. That’s a theme that carries through the first four episodes of the season, leading up to everything coming to a head with Malivore. We’ll see how much she cares about everyone around her — even if that means making some tough decisions about people she loves.”

Lizzie and Josie were able to pull Hope and MG out of Malivore’s head before he could make good on his promise of epic torture, but Cleo was unfortunately left behind in his evil clutches. Feeling defeated, Hope turned to Lizzie during her latest existential crisis, and wound up receiving some surprising words of encouragement. After apologizing for dumping on Hope and Landon’s relationship all the time, Lizzie explained, “You guys have something that I never really had but I’m pretty sure that I want — love.” (I know Lizzie has Ethan now, but am I the only one still devastated that things didn’t work out with Sebastian?)

“Hope and Lizzie have one of my favorite relationships on the show,” Russell says. “It’s beautiful to see how far they’ve come over the last three years. And this is a very adult conversation that they’re having [in the premiere]. Knowing that they’ve both grown to the point where they can have this grounded moment is a beautiful thing to see.”

Of course, a pep talk isn’t the only thing Hope received at the end of the hour. Much to Malivore’s dismay, Cleo apparently gifted Hope with the inspiration she needs to take him down. Now, it’s just a matter of time. The question is: Even if Hope is able to defeat Malivore and save Landon, will things actually go back to normal for them as a couple? And what even is their “normal”?

“The theme of Hope and Landon is just complications,” Russell says. “Right person, never the right time. That’s something that will carry through [these first four episodes], as well. I don’t think there’s a world where they could just go back to the way everything was before. It’s safe to say that there will be a readjustment period where they may have to discover parts of themselves outside of each other.” 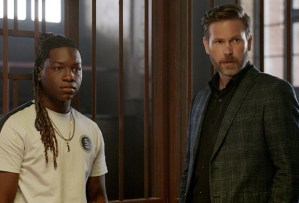 * Kaleb’s journey into Malivore brought him back to the night he first met Alaric, which apparently didn’t go as smoothly as Kaleb remembered. Sure, he recalled feeding on one person that night, but the truth is that he chowed down on an entire marching band. It’s no wonder Kaleb’s brain repressed such a traumatic incident, as simply reliving the horror was enough to trigger his bloodlust all over again. Fortunately, his misguided attempt to feed on Alaric actually helped him find the real Landon — even if he chose to withhold that information from Hope at the end of the episode. (Side note: As if Kaleb’s backstory wasn’t tragic enough, the night in question was apparently October 3, aka Mean Girls Day. Is nothing sacred?!)

* Finch offered to keep Josie and Lizzie company while they stood guard outside of Landi-vore, an experience that proved surprisingly illuminating… especially when they reached the question in their magazine’s compatibility quiz about where they see themselves at 25. Sensing some obvious family secrets afoot, Finch admitted that she’s been researching the Gemini coven, but she noticed that certain pages were suspiciously ripped out of a book in the school library. Though we didn’t get to see Finch’s full reaction, Josie agreed to tell her everything she wanted to know about — wait for it — the merge. It’s been a while since we’ve heard that word.

Your thoughts on Legacies‘ fourth season premiere? Grade the episode in our poll below, then drop a comment with your full review.