On the surface, Guilty Party is a show about a troubled woman just trying to rebuild her shattered reputation. But as viewers will come to find, there is so much more going on.

The dark comedy, which premieres this Thursday on Paramount+, follows Beth, a big-name journalist played by Kate Beckinsale who finds herself disgraced amid a major scandal. Her redemption arc serves as a jumping-off point and becomes an unlikely team-up filled with unexpected twists and turns.

Season 1 tracks Beth’s attempts to rebuild her name by taking on the story of a woman incarcerated for murder, and she ends up making an even bigger mess of her life along the way. 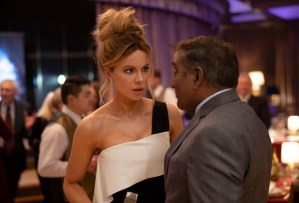 “She’s been in a difficult spot,” Beckinsale tells TVLine. “She’s very humiliated and hurt. Her identity is in question, [and] she’s trying to find her way in her career, in her marriage, in herself. She’s not necessarily making the most rational decisions, and she’s pretty reckless and impulsive, and does some stupid stuff, but she’s actually a good person. She’s just got a lot of blind spots going on.”

Beth’s plan to help the imprisoned Toni, who proclaims her innocence, is flawed. She views this as an opportunity to clean up her reputation, not realizing that she’s doing so on the back of a Black woman’s pain.

“I often say she is not our hero, but she is the protagonist,” series creator and showrunner Rebecca Addelman explains. “It was a conscious decision to make her a very privileged white woman. She’s entering the situation with Toni thinking, ‘This story can help me.’ It’s something that Toni can detect right away, and Beth is not used to people calling her out. She’s [not] used to having some of her privilege checked.”

When Beth first meets Toni, “she’s asking me all these questions,” Jules Latimer, who plays Toni, explains. “By the end of [the interview], I’m like, ‘Did you look me up? Do you know who I am?’ You can just tell these are two flawed people trying to, for myself, live freely, and for her, to be a well-regarded journalist, and we keep failing at both of those things. Throughout the season, you just see two people who are trying their hardest, and they’re not getting it. It’s not sticking, and for some reason, how imperfect they both are, we have this bond that is almost indescribable. It’s like, ‘I don’t know why I keep sticking with you,’ and she doesn’t really know why she keeps sticking with me, but we need each other.” 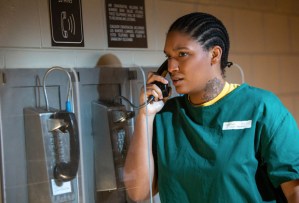 The unlikely partnership forces Beth to look inward and realize that she might not have it as bad as she thinks she does. “That’s one of the interesting parts of the show: to see somebody who is very caught up in the drama of their life, and then meet somebody who’s actually got some really difficult things that she’s not experienced,” Beckinsale adds. “It grows her up a bit.”

Though it’s a comedy, the series touches on a bevy of issues such as race and class, the carceral system, America’s fetishization with guns and even the way in which we consume news.

“What was fascinating to me was to have the opportunity to talk about perspective and who gets to tell the story, and whose story is being told,” Addelman shares. “We have historically assigned objectivity to journalism, that there are facts to find. And yet what the show is doing, what the Beth character is our conduit to help us say and do, is that there’s no such thing as objectivity. Everything is subjective, and everything you’re going to watch on this show is coming through someone’s point of view and someone’s experience. We were very consciously creating characters who had very specific backgrounds and lives so that we could filter the show through their perspective.”

Addelman also notes that there are “definitely some episodes and scenes that very funny and absurd and ridiculous, and there are times where we do allow ourselves to get serious and dramatic.” Fans can expect unique characters to pop up this season, including a woman named Patti (played by big screen vet Linda Kash). “I do look forward to everyone seeing the many personalities of Patty coming up,” she concludes.