This week on CSI: Vegas, Gil Grissom returned to the fold, doing what he does best: following the evidence and workshopping Hallmark card-like idioms about science being the only knowable truth.

Coming off the orchestrated reveal that the OG team’s trace evidence guy, David Hodges, had been tampering with/manufacturing evidence in a makeshift storage unit “lab,” Sara was rarin’ to prove a frame job while Gil prefers to face the actual facts. “Science will tell us if how things look is how things are,” and all. Sara gets word that Hodges has self-surrendered to the PD, where he faces dozens of counts of evidence tampering, perjury and such. But as much as Sara and Gil are ready to follow any evidence that might exonerate their colleague, current LV lab boss Maxine warns that they “can’t be within 1,000 miles” of this case, given the microscope everyone is now under. 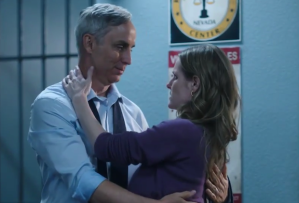 Waiting for Hodges to get done being processed, Gil wonders to Sara, “How well do we know David Hodges?” And as if on cue, Hodges emerges to greet… his wife, of about six months. Hodges (now living more happily as an “expert witness”) introduces Gil and Sara to Emma, then attests that the case against him is “a crock.” Gil and Sara counter that the storage unit, which had been rented for a decade, was rife with files, his fingerprints, and personal effects that to fake would require a deep knowledge of their target. When Hodges remarks that a Boggle set he recently rummaged for was not to be found, Gil and Sara look into whether someone stole things from his home, to plant — though there is no sign of B&E. Later, though, a flyer posted in the neighborhood tells Gil that Hodges’ neighbor’s guard dog recently went missing. Gil and Sara find the doggo’s fresh grave, and upon exhuming it, Gil and some handy bugs (pupa) determine that the dog died shortly before Sara, Maxine et al were lured to the daming storage unit.

Maxine mulls Gil’s findings, but reminds that he and Sara cannot be touching the Hodges case. However, she sees cause to investigate this case of “animal cruelty,” and asks Grissom if he would like to come on as an “entomological advisor.” (Along the way, Gil marveled at the state-of-the-art “Taj Mahal” the lab had become, and Sara explained that it was the result of federal grants and Catherine Willows “going to bat with her casino friends.”) 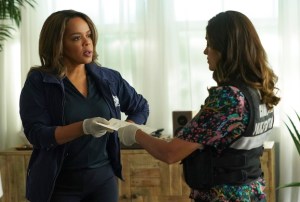 Elsewhere this week, Maxine’s CSI team investigated the murder or a would-be bride and groom on their wedding day. The double homicide led Allie and Josh to a ritzy swingers club that the almost-marrieds would frequent with an oncologist pal. Thing is, the owner, Anwar, was secretly recording the liaisons and using them for blackmail. But when Anwar suffered a mild stroke and developed a tremor, he was seen as weak and at least one blackmail victim escaped his thumb. That’s when his front desk hostess (does Mia Kirshner have a kid sister?) privately decided to take out the engaged duo for the purpose of a photo op, wearing Anwar’s boots, to give the oncologist, another blackmail target, a scare.

What did you think of this week’s CSI: Vegas and its proportion of OG characters?