Ever since Upton was forced to kill Roy in Chicago P.D.‘s Season 8 finale, she hasn’t quite been herself. Although Voight urged the Intelligence cop to learn how to cope with the guilt, having to lie to everyone — including her fiancé — has been eating away at her, and Halstead has begun noticing. This week’s episode, titled “In the Dark,” finally brought that painful secret to light as the team took on a disturbing case that also pushed Upton to her emotional limits.

THE CASE | It’s always refreshing to see Chicago P.D. switch up the pairings, and Wednesday’s episode gave us an Upton and Ruzek team-up. However, the unique pairing occurred under awful circumstances: the brutal discovery that a child was tortured and abused while being held captive in a basement. It was unclear whether he escaped or was killed, and Intelligence immediately went to work on figuring out what happened. 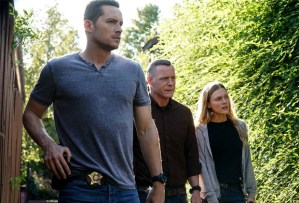 The team eventually found the boy, only to uncover more disturbing details: He was one of eight boys who’d been abducted — the other seven were murdered. Plus, another boy was still alive and needed help. The case forced Upton to work throughout night, and the signs of wear and tear on her conscience were starting to show. Her eyes were gaunt, she had trouble remembering things and seemed unsure of herself. She angrily interrogated the real estate agent in charge of the house and explained the real reason they needed his help.

After stepping away to wash her face and hopefully pull herself together, she returned to find that said agent attempted suicide. The brutal scene proved to be the final straw for Upton, who broke down and blamed herself for not adequately searching him for weapons. Halstead helped her through the panic attack, assuring her she did nothing wrong. (Platt did confirm they searched the guy, but Upton’s memory had been foggy.)

The team eventually identified their main suspect as the real estate agent’s brother. They found the boy alive and relatively unharmed, and Upton was forced to kill the culprit during a brief scuffle. 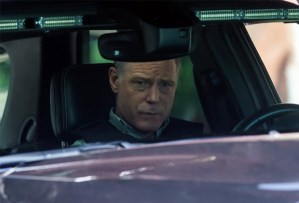 THE AFTERMATH | Halstead already had his suspicions about what really happened with Roy, and Voight’s concerned look during Upton’s panic attack only seemed to confirm they hadn’t told him everything. Following up on his request for GPS coordinates, he learned that they were sent through “police mail,” but he somehow never received them. He tracked the coordinates to the field where Voight buried Roy’s body, half knowing the inquiry would probably alert his Intelligence boss. When Voight pulled up in his truck, it was finally time to get to the truth.

Voight explained that Upton saved his life when Roy reached for his gun, and that he never wanted her there. “Jay, you can be mad at me,” he tells Halstead. “You can be as angry as you want, but now you know, so help her.”

Halstead was not having it. “You did this to her! You dragged her down with you!” he hit back. When Voight told him, “I don’t think you know the woman you’re sleeping next to,” Halstead responded with a hard punch to the face. JAY!!!!

Halstead reminded Voight that he and Atwater found Burgess without crossing a line — just good police work. Meanwhile, Voight went the opposite route and failed. Halstead stormed off, leaving Voight to contemplate that thought alone in the field.

The episode ended with Upton waking up in bed and finding Halstead staring back at her from the door. She knows he knows, and now there is a big conversation to be had. It’s going down.

How did you feel about this week’s episode? What do you think will happen now that Halstead knows the truth about Roy? Sound off in the comments below!