Warning: This post contains spoilers from Batwoman‘s Season 3 premiere. Read at your own risk.

If Batwoman’s Season 3 opener is any indication, Ryan Wilder’s “Me Season” is not going to go the way she thinks it will.

A huge weight was lifted from her shoulders when she was released from parole, and it seemed like she could finally move forward with a fresh start. But with this birth mother bombshell hanging over her head, it looks like she’s in for an emotional journey ahead.

Sophie confirmed during Wednesday’s premiere that Alice was, indeed, telling the truth. But rather than open Pandora’s Box, Ryan decided to just leave it at that. No need to dig further if she already has her Bat Team as family, right? We don’t know how or why mother and daughter will cross paths, but press photos released by The CW confirm that they do in Episode 2, even though they aren’t actively looking for each other. According to Javicia Leslie, who plays Batwoman, Ryan’s attempt to bury the past is only the beginning. 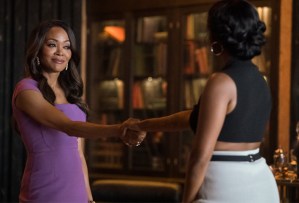 “The season starts with Ryan realizing that, ‘No, my mom is alive, and she just didn’t choose me,’” Leslie tells TVLine.

The episode introduced Ryan’s birth mother as Jada Jett (played by Robin Givens), a wealthy business tycoon with her own helicopter. She and her son Marquis Jet (Law and Order: Organized Crime’s Nick Creegan) have lived a different life from Ryan, one in which they want for nothing and have everything at their fingertips. When she does eventually get to know her new family, Ryan will contemplate the privileged life she missed out on.

There’s a moment of realization — and maybe a little concern — in the episode when Jada learns that someone had been looking into her private life. It sets forth a chain of events that will force the businesswoman to start looking inward. “You can’t run from your past… and this past comes walking right into her office,” Givens says. “[It] forces her to take a good look at her past.”

“At one point, [Ryan’s] mom is saying, ‘No, I don’t want you in my life,’ and she’s got to stand there and take it and not be hurt,” Givens teases. “It’s just a beautiful dynamic in the midst of this world that Ryan is dealing with.”

Between her family drama, working with Alice and former GCPD detective Renee Montoya (Gotham’s Victoria Cartagena) to recover the Bat Trophies that went missing in Season 2 and taking on the infamous Poison Ivy, Ryan has a lot on her plate this season. Leslie teases “some plot twists this season” and, hopefully, “a little romantic side of Ryan that we’ve never been able to see.”

Season 3 will also explore the dynamic of the Bat Team and how that can “coexist with her relationship with her family” or, rather, how it becomes an issue. “She starts the season like, ‘I got this,’ and then obviously, there are going to be a few wrenches thrown in her plan,” Leslie notes.

Give the Batwoman season premiere a grade in our poll, and hit the comments to share your thoughts.