And the winner is… No, not of The Voice, of the Monday-night cliffhanger, in which Team Kelly’s Jershika Maple was left to decide whether to join Team Legend or Team Ariana. And the winner is… well, was… John. (Cue the angry Ari stans.) From there, we dove right into Tuesday’s Battles, sending home three more competitors and reestablishing that one contestant in particular has a bag of tricks at her disposal that’s larger than most of our closets. Read on, and we’ll discuss not only her showstopper but all of the evening’s performances.

Team Blake: Hailey Green (Grade: B+) defeated Lana Scott (Grade: B-) on “Girl” — Lana saved by Blake | In rehearsal, comeback kid Hailey began to fret that country-pop might be too great a detour from her lane. What’s more, Lana’s pure-country voice cut through the music like a laser. On stage, though the Maren Morris number fit Lana as well as her hat did her head, it was Hailey who really stole the show. Her throaty, low tones somehow made Lana’s voice seem small and twee by comparison. It wasn’t small or twee, mind you — it was just that Hailey’s vocal was so fantastically “Rowr! Notice me!” that it reduced her competitor’s to a polite, “Hi, I’m here, too.”

Team Blake: LiBianca defeated Tommy Edwards on “Save Your Tears (Remix)” | This duo was given such short shrift, I couldn’t even assign letter grades (unless you wanted “I” for incomplete). They sounded fine in the teensy bit that we heard, but couldn’t we all have guessed who would be advancing by the fact that if you heard the name LiBianca, you’d remember her, and if you heard the name Tommy Edwards, you’d be like, “Wait, which one was he again?”

Team Kelly: Xavier Cornell defeated Carolina Alonso on “telepatía” | Also given the blink-and-you-missed-’em treatment, this twosome sounded a bit strained during the snippet that we heard. Maybe they managed to stay on the right side of ear-piercing, or maybe the show did us a favor by only showing us the highlight of their performance?

Team Ariana: Katherine Ann Mohler (Grade: B-) defeated Vaughn Mugol (Grade: C) on “Dilemma” | Good Lorde, what was Ari thinking giving these two Nelly and Kelly Rowland’s duet? “Oh my gosh, no!” was advisor Kristin Chenoweth’s reaction, too. (At least I was in good company.) The song seemed like it was gonna be fine for Katherine, but Vaughn rapping? Ergh. No matter how lost in her head the technician got being melodically militant — was it just me, or did she look half the time like she was on the verge of tears? — I had a feeling this Battle was hers to lose. In the moment of truth, the teammates were kind of adorably awkward. But great, this was not. Vaughn has a nice voice, but I don’t hear much “special” in it. On the other hand, Katherine, at her best, sings with the clarity of a freshly Windex’d window. 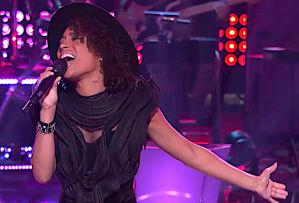 Team Legend: BrittanyBree (Grade: A+) defeated Samara Brown (Grade: A) on “Something He Can Feel” — Samara saved by John | In rehearsal, the dynamic duo reminded us that they definitely have the pipes to do justice to the classic… but it also sounded kinda messy. Like all the ingredients were there, they just weren’t mixed in the right proportions. John warned Samara that she might be veering too much from the melody. Brittany, he noted, had to keep in mind that she wasn’t in church anymore, so she had to imagine the person to whom she might be singing this song. On stage, the twosome absolutely turned it out. Any other Battle, Samara would have had it in the bag; she performed with a thrilling urgency. But Brittany, man… she was just extra extra, putting spin on notes that she’d already made interesting and just conjuring up passions from her depths. I mean, those guttural notes… damn! She is a force of nature!

So, who stood out to you Tuesday night? Any of the coach’s decisions make you go, “Wait, what?” Vote in the poll below, then hit the comments.