Chemistry has never been an issue between Robyn McCall and Det. Marcus Dante on CBS’ The Equalizer.

From the moment she pretended to be a lawyer in the pilot episode in order to talk to her client, an innocent murder suspect, McCall and Dante’s growing respect and curiosity for one another has grown with every episode. While there were times in Season 1 where Dante questioned McCall’s methods and wondered if he could trust her, he came around in the Season 2 opener when McCall equalized a case for him. Now he truly believes in her.

“The minute Dante decided to actually reach out to the Equalizer, the rules changed for him,” Tory Kittles, the actor behind Dante, tells TVLine. “It becomes a great game of cat-and-mouse. At different times, Dante is the cat, and sometimes he’s the mouse. But something tells me the Equalizer is always the cat.”

An alliance with McCall will come at a cost for Dante, however, and in this Sunday’s episode (8/7c), a new investigator named Det. Ken Mallory (Godfather of Harlem‘s Dominic Fumusa) attempts to catch and arrest McCall. Mallory is also distrustful of Dante and does little to mask his suspicions.

“Dante’s father is in prison for corruption, and having that cloud hang over his head while trying to do the right thing hasn’t always been easy,” Kittles shares. “Now that he’s working with McCall, he becomes a suspect in a sense. And the people he’s been working with to take her down are now gunning for him, too. It puts him in a very precarious situation. What’s he going to do to get out of it? That’s the excitement of where this season is going.” 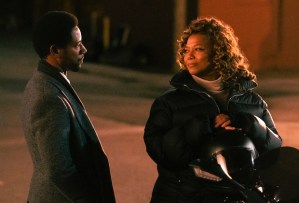 McCall and Dante are also both divorced parents and crave justice in an unjust world. That said, Dante will still have to decide just how far he will go to help McCall, Kittles adds.

Speaking of romance, Kittles is mum on whether or not McCall and Dante will go there this season. But there’s always a chance, he teases. “There is romantic chemistry there,” Kittles says with a chuckle. “And so we will have to wait and see.”

What do you think of a possible McCall and Dante ‘ship on The Equalizer? Drop your thoughts in the comments.