As a teenage athlete, Colin Kaepernick is challenged to “prove them wrong” — though he wonders why he always has to? — in the trailer for Netflix’s scripted drama series Colin in Black and White.

Premiering Friday, Oct. 29 with six 30-minute episodes, Colin in Black and White tells Kaepernick’s origin story through the lens of his formative years as a gifted football, baseball and basketball prospect (played by Jaden Michael), “before he reached the highest levels of American football as an NFL quarterback and became a cultural icon and activist.” Mary-Louise Parker (Weeds) and Nick Offerman (Parks and Recreation) also star.

After claiming and then sharing the San Francisco 49ers QB job over multiple seasons, Kaepernick famously knelt during the playing of the national anthem ahead of a 2016 preseason game. When he became a free agent after that season, he remained unsigned — presumably amid political pressures. 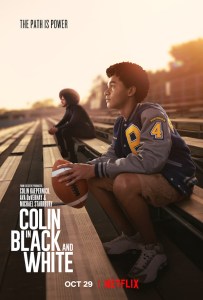 Previewing the Netflix series’ introductory scope, Kaepernick says,” In high school, I faced a lot of different challenges from sports, to my family, and other parts of my personal life, which a lot of viewers may be able to relate to. But I also faced obstacles as a Black kid growing up in a white family in a white community.” He brought his pitch to filmmaker Ava DuVernay in 2017, who signed on to “bring these stories to life in the most impactful and compelling way possible,” he says.

“What interested me,” says DuVernay, “was the idea that, through his story, I could shed light on a core belief that I hold: that we can all be the hero, the lead character, of our own lives…. Bottom line, I was interested in the process of becoming the star of your own life. This doesn’t mean not being of service to others or being selfish and ego-driven. It means having the confidence to stand up and stand strong for oneself so that you can be the best version of yourself.”