Steals and Saves flew fast and furious during Monday’s episode of The Voice as the first of the Battles made available half a dozen acts from Teams Kelly Clarkson, Blake Shelton, John Legend and Ariana Grande. Which contestants stayed put, which one was set to be stolen, and which one was so sought-after, they made show history with not only a Save but three offers to steal? Read on…

Team Ariana: Katie Rae (Grade: C+) defeated Bella DeNapoli (Grade: B) on “No More Tears (Enough Is Enough)” — Bella saved by Ariana | After Ariana welcomed adviser Kristin Chenoweth with an anecdote about how they met when the future coach was a starstruck 10-year-old backstage at Wicked, they put their first duo through their paces in rehearsal. And Bella and Katie came to work! Ari’s only request was that they add an “ooo.” Even during the stage rehearsal, she only seemed to have a note about a little hand choreography. When at last the duo took their places on stage, they started off super strong, Bella being particularly impressive with her well-enunciated, actor-y take on Streisand’s opening lines. As the song switched into full-on disco mode, things got a bit silly and karaoke-ish, but the winner became clear: Bella. Whereas Katie struggled a bit — she strikes me as a rocker who wasn’t totally comfortable with the number — Bella did not. Surprising outcome — at least till Ari saved Bella.

Team Legend: Samuel Harness (Grade: B+) defeated KJ Jennings (Grade: A-) on “I Know What You Did Last Summer” | Just like whenever Kelly makes reference to “that singing competition I did,” John’s “How do ya do?” to his Battles advisor Camila Cabello had to dance around the name of the show that gave her her start as a member of Fifth Harmony (The X Factor). It was odd. Does The Voice fear we’ll look up these other shows just because their names might be mentioned? We do know they exist/existed. Anyway, once the teammates arrived and ran through Camila’s duet with boyfriend Shawn Mendes, John warned Samuel that he was both ahead of the beat and holding back too much. The coach also suggested that Samuel and KJ work on singing in poppy staccato. On stage, they were pretty terrific, the rawness of Samuel’s voice serving as a perfect contrast to KJ’s smoother, stretchier voice. Tough call, but I’d have given the win to KJ, who seemed to have greater presence and range. Plus, as Ari noted, her “runs were so precise.” 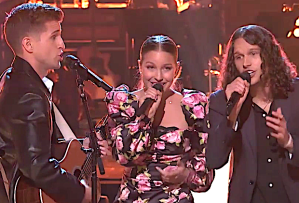 Team Kelly: Girl Named Tom (Grade: A+) defeated Kinsey Rose (Grade: A-) on “Seven Bridges Road” — Kinsey saved by Kelly | Even before the competitors rehearsed with their coach and advisor Jason Aldean, they were in perfect harmony; Kinsey was practically ready to adopt the smiley trio. Jason noted that they had to be careful not to let all those voices turn into a jumbled mess, but GNT quickly made clear that they knew what they were doing, cutting the band and doing a little rearranging. On stage, well, [bleep]! Not only was the performance freaking awesome — that impeccable acapella intro alone! — it was crazy hard to judge. At first, I leaned toward Kinsey, whose voice has a rough-around-the-edges quality that makes it seem mega authentic. But the more GNT sang, the more they forced me to think, “Nope, they’re not just another family group with beautiful harmonies, they have star power, too.” Truly excellent Battle. No wonder after Kelly’s decision was rendered, Voice history was made when Kinsey found herself contemplating three Steal options as well as a Save.

Team Blake: Peedy Chavis (Grade: B) defeated The Joy Reunion (Grade: C) on “Joy to the World” | Once Blake and advisor Dierks Bentley got done razzing each other over their hair — Blake had never seen Dierks’ so long, Dierks had never seen Blake’s so gray — they got down to rehearsing Three Dog Night’s classic with the competitors. For my money, Peedy, for all the criticism of his tendency to pull from Elvis’ playbook, stood out; Joy Reunion sounded a smidgen muddy. Blake’s only note for the teen was to bring the same energy that he had to his Blind to this Battle. On stage… huh. The performance overall fell kinda flat. The harmonies were nice, and Peedy did his best to pep things up, but it all just felt sorta… heavy. Regardless, Peedy still would’ve gotten my vote to move on to the Knockouts. He poured it on a bit thick but did demonstrate some charisma, and I dug the way he sometimes zigged vocally when I expected him to zag. “There’s no way to put your finger on it,” his coach told him. “That’s just a gift.” 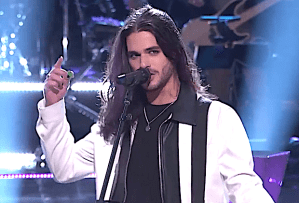 Team Ariana: David Vogel (Grade: B) defeated Chavon Rodgers (Grade: C) on “Sugar, We’re Goin Down” | In rehearsal with the duo, Kristin reminded David to smile — what could go better with his dreamboat hair, right? — and Chavon to enunciate, which I vaguely recalled from his Blind had not been his strong suit. “I know you both want my phone number,” she teased after pulling a Jennifer Hudson and throwing a boot, “and I will give it to you later.” (Please, Voice, can we keep her?) When the spotlight fell on the guys, they were fine but nothing extraordinary. David definitely had the edge, though. Even if you removed from the equation his rock-star locks and the piercing eyes behind the liner, he sang, as John noted, with far greater clarity than his opponent. Hilariously, when Chavon exited the stage, he didn’t hear Ari asking for a hug and left her hanging.

Team Kelly: Jeremy Rosado (Grade: B) defeated Jershika Maple (Grade: B) on “Hold On” — Jershika stolen by TBD | Running through their duet, Jershika and Jeremy made Beliebers, so to speak, of their coach and advisor. Jason marveled that Jershika had pulled off a Beyonce-esque run and praised Jeremy’s falsetto. Kelly suggested that although she wanted to turn loose their massive voices on the Justin Bieber hit, maybe they didn’t need to start out so big, so as to give them someplace to go later in the number. In the moment of truth, the contestants did a pretty good job of managing their dynamics, building up little by little instead of raising the roof from the word “go.” (That said, the whole thing really could’ve used some more energy; they did what they were asked to, but it was an “eh” of a song choice for them.) Gradewise, I honestly couldn’t say that one of them was better than the other — they were that well-matched. But as Kelly did, I’d have given the win to Jeremy, whose runs never fail to make me go, “Wow.” Tuesday, we’ll find out whether Jershika chooses to be stolen by John or Ari, both of whom were as dazzled by her runs as I was Jeremy’s.

So, which act were you sorriest to see eliminated? And who did you think gave the night’s standout performance? Vote in the poll below, then hit the comments.