Watching Mira and Jonathan return to the house they used to call home in the limited-series finale of HBO’s Scenes From a Marriage felt like a crime scene reenactment.

That’s because the last time the two of them were there, in Episode 4, things ended violently and angrily. And at one point, Mira threw books at Jonathan because she didn’t want to sign the divorce papers. But as viewers learned Sunday night, divorce agrees with this pair, and they seem to be more than fine with hooking up four years after Mira ran off to Israel to be with Poli.

Over the course of their occasionally breathless conversation, we also learned that Mira and Jonathan started getting frisky again at the shiva after his father died. Touched that she still cared (given all of the animus that had transpired before their divorce was final), Jonathan was once again aroused by his ex-wife and decided to do something about it. Mira, who is no longer with Poli, was interested as well, and their latest rendezvous would likely not be their last.

Still, why did Jonathan think it was a good idea to rent their old house on Airbnb (Master of None-style), given how ugly things had once been? At first, the novelty of walking around and peeking into closets and cupboards seemed exciting for them. The two understood why the new owners remodeled and updated the kitchen, for instance, but Mira remarked that it had lost some of its charm in the process. When she said so, you couldn’t help but feel she was referencing their little dalliances. 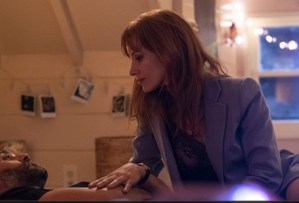 There were also sore spots that couldn’t be kissed away. Jonathan visibly winced when Mira said she prefers hotels to houses, and it was clear that he hadn’t forgotten that Mira had once spent two days holed up in a hotel with Poli when she was having an affair. Mira also seemed to struggle with Jonathan’s new wife and child, because dude clearly wanted another child and Mira’s decision to get an abortion was one of the main things that ripped apart their marriage.

When they attempted to have sex in the new owners’ master bedroom, Jonathan struggled with their past problems in that part of the house and he couldn’t get out of his head. He decided to get up and get dressed, and even thought about leaving. Then his wife Jane called for a video chat with their son, and Jonathan lied about being at his mom’s house. And suddenly, all he wanted to do was stay with Mira.

He told Mira his marriage to Jane was sexless and that he’d cheated with other women behind Jane’s back even before the two of them had rekindled their flame. A nonplussed Mira said she wasn’t one to judge, and Jonathan explained that their marriage had been like a piece of tape and his current nuptials with Jane were like that same piece of tape re-applied. But it just didn’t stick the same way.

Mira told Jonathan his analogy made her sad but, he said, it was not sad, just honest. He also said he would never love another woman the way he loved her, and that he knows his marriage with Jane will eventually end, but at least he had gotten that baby he wanted. Mira, in turn, said the divorce had taught her it was actually good to be alone sometimes.

By the installment’s end, Mira and Jonathan had made love and were cuddled up in the attic, which the new owners had converted into a brightly lit playroom for their child — which makes sense when you think about the fairytale love Jonathan and Mira now appreciate and share because they are better off apart.

What did you think about the Scenes From a Marriage series finale? Grade the series in our poll and drop your thoughts in the comments.