The following contains major spoilers from the Oct. 11 episode of NCIS.

Something huge happened this week on CBS’ NCIS.

But along the way, something else major happened: We learned once and for all how Gibbs gets his boats out of the basement, when FBI Agent Alden Parker (played by Gary Cole) went looking for AWOL Gibbs in the suspended NCIS agent’s home. As Parker shined his flashlight around Gibbs’ cellar, we saw that the fourth, cinder block wall — the one that we have almost never laid eyes on — had a large, boat-shaped hole sledgehammered into it (see photo below). 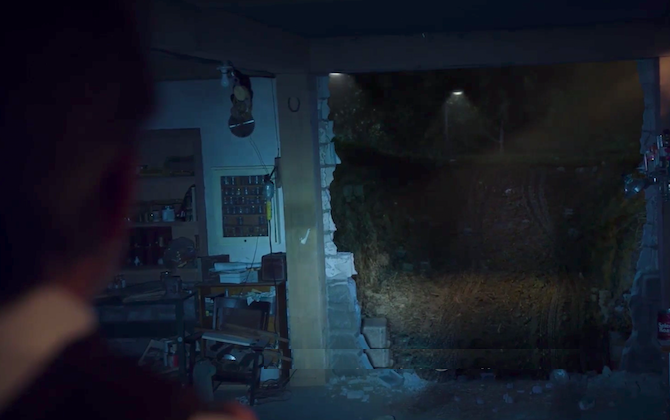 As such, the show’s longest-running mystery has been solved. Gibbs knocks down that fourth wall each time he has a boat to remove (and then bricks it back up).  Over the years, multiple NCIS characters who have stood in Gibbs’ basement have themselves wondered/asked him how he gets his boats out. In fact, the recurring joke resurfaced as recently as in this season’s premiere, when McGee and Torres shared the curiosity with a state trooper.

Most amusingly during Harmon’s final episode, Torres shared with Gibbs not only the fact that many have wondered about his basement, but he also rattled off some of the “nuts” theories (including many rounded up by TVLine). “Moveable walls, pulley systems… your house has a coal tunnel underneath,” Torres said, much to Gibbs’ amusement.

Were you happy to have this Gibbs-centric mystery (finally) solved, before Harmon walked out the proverbial door?