No matter how good you are at your job as a working mom, there’s always a nagging feeling that you could be a better parent.

That was one of the driving themes behind The Equalizer‘s Season 2 premiere on Sunday, as Robyn dealt with the fallout of telling her daughter Delilah what she really does for a living. As a result, Delilah did her level best to avoid her former CIA agent mother by staying with her father and his new wife.

When she eventually returned home, she gave Robyn sass and made curt remarks about not being able to trust her. Robyn and Aunt Vi quickly put Delilah in her place — this is a Black household, after all — but later, Robyn still worried if maybe it was time to give up equalizing to spend more time with her judgmental teen.

Fate had other plans, and when bank robbers shot and killed one of Marcus Dante’s fellow NYPD detectives, he turned to Robyn to track down the bad guys and make things right. Touched that Dante was finally starting to understand and appreciate how she gets justice for people who can’t rely on the law (from an actual lawman, no less), Robyn took the case and helped connect the dots with Harry, Mel and Bishop’s help, of course. 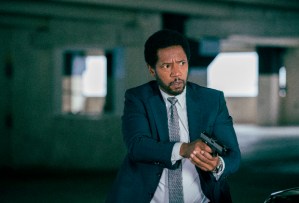 First, they figured out who the safety deposit box belonged to and went to the guy’s house. But when Robyn and Dante arrived, Atticus’ house was in disarray, and there was blood on the floor. The pair searched the house and found Atticus’ young daughter hiding in one of the closets. The girl said some men had come to their house, and her dad had told her to hide. The men beat up and tortured Atticus and then took him away.

Robyn and her team dug a little more and figured out that Atticus had been dealing with some rogue CIA agents who had robbed the bank to get to his safety deposit box, which contained sensitive information on a shady congressman. Dante approached the congressman to find out what he knew, and soon, masked men were following him and attempting to shoot and kill him. That’s when Robyn had to go into Equalizer mode and tell Dante to send his sons to their mom’s house, stay at a hotel that night and pay in cash until the case was all sorted out. 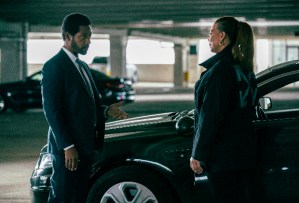 The sorting-out process included tailing one of the congressman’s henchmen who led them directly to the warehouse where Atticus was being held. He was still alive (wow!), and Robyn and Dante wanted him to remain among the living, so they opened fire and eventually took down the bad guys. The worst of the bad guys almost killed Robyn, but Dante shot him before he could. That should make things square between Robyn and Dante, right?

After the case was closed and Dante had successfully reunited Atticus and his daughter and arrested the congressman, he met up with Robyn and told her the world does need her, and he was grateful for her help finding justice for his deceased colleague and friend. There was even a moment when it seemed like Robyn and Dante were about to kiss, but they didn’t.

Later, Robyn told Harry and Mel she was going to keep on equalizing after all. And most importantly, she talked to Delilah, and the two decided that they would find their way back to mutual trust and respect.

What did you think of the Season 2 premiere of The Equalizer? Grade the opener in our poll, and drop your thoughts in the comments.