Warning: This post contains spoilers from Heels’ Season 1 finale. Read at your own risk.

And just like that, the DWL has a new champion.

Heels wrapped its inaugural season on a surprising and satisfying note. Crystal, who was told she couldn’t wrestle in the DWL, won the championship in the main event at Georgia State Fair, and she initially wasn’t a part of that match. But with Wild Bill unavailable (he pooped his pants and couldn’t move) and Ace clobbering his brother Jack in a real-life brawl, it was up to the aspiring wrestler to defuse the volatile situation by taking on Ace herself.

As the last one standing in the ring, Crystal received the go-ahead from Jack to climb the ladder and take the belt. It’s a fitting ending that, according to series creator Michael Waldron, had always been the plan. 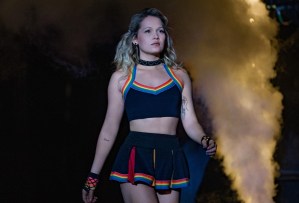 “Very early on in the writers’ room back in 2017, we knew that we wanted to get there with her,” Waldron tells TVLine. “It felt like a really fulfilling ending to her season-long story that, at the same time, makes you wonder: Where does she go from there?”

Crystal is an amalgamation of the barrier-breaking women wrestlers from past and present — from Trish Stratus to Becky Lynch — who’ve shown time and again that women are just as entertaining in the ring as the men. Now that she’s champion, it opens the door for other women to lock up in a DWL ring.

“You can argue that some of the best matches and storylines are happening in the women’s division. There’s that same opportunity for growth and expansion within the DWL, and so it’s gonna be interesting to see what Jack does with them,” Waldron says. “Kelli Berglund [who plays Crystal] is obviously incredible, and so what it would be like to bring in some rivals for her could be a lot of fun.”

Heels hasn’t yet been renewed for Season 2 — Waldron says conversations are “ongoing” — but if the show does return, it will also need to address the Spade brothers and their falling out in the middle of the ring. Jack finally came clean to Ace about planning the first incident with the tissues which set Ace off, and he nearly strangled his older bother to death during their match. The finale ended with the brothers still at odds and unlikely to reconcile anytime soon. 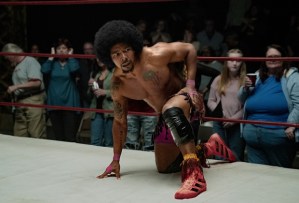 “They’ve been bending all season. At the end of this final episode, as they get into a real fight in the ring, there’s a lifetime of rivalry and jealousy that explodes in that ring,” Waldron explains. “I think they’ve finally broken apart, and there’s the question of: Where do they go from here? Who is Jack without Ace? And who is Ace without Jack? That’s all interesting stuff to explore.”

Other potential stories to explore include Ace finding some kind of therapy (“Ace is a guy who has experienced a seismic level of trauma and is trying to process those feelings as best he can”) and delving deeper into some of the show’s side characters like Diego and Apocalypse.

“If [the DWL is going to] succeed, you’re going to have to see Jack start to do the hardest thing for him, which is cede a little bit of control. Part of that means listening to other wrestlers like Rooster [and] Diego and perhaps giving those guys the push that they might deserve. Season 1 is so much about fighting against failure. Looking to the future, it’s interesting to ponder: What are the struggles of success that this team might face together?”

Waldron adds that “our creative team is talking and discussing what do we want to do [in Season 2]. I hope we get to continue the story because, obviously, we’re just getting started.”