Sylvia Kwan realized her experience making the TV movie List of a Lifetime would be inclusive and welcoming on one special day in February.

It was Lunar New Year 2021, and the cast and crew all donned red clothing in honor of the holiday. It’s a tradition the Grey’s Anatomy vet had experienced and cherished in her personal life lots of times, but had never seen in the workplace. The Lifetime flick (premiering this Sunday at 8/7c) follows Brenda (Kelly Hu), a woman battling breast cancer while reveling in the budding relationship she has with Talia (Kwan), the long-lost daughter she put up for adoption.

Together, the two create a bucket list so that Brenda can truly live, despite her ever-dwindling health. The film is also centered on two women who happen to be Asian American and was directed by Asian American filmmaker Roxy Shih (Dark/Web).

“It’s something that I’ve never really experienced on a set,” Kwan tells TVLine with tears of joy in her eyes. “I got a little emotional that day. When I walked in and everyone was wearing red, I realized, ‘This is different.’ You know? I love that this project had so much diversity behind the camera as well as in front of it. I’m just really, really grateful to be a part of that and part of the change.” 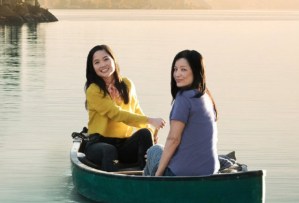 This isn’t the first time Lifetime has had a movie centered on Asian Americans on both sides of the camera. In 2020, the cabler ushered in the Yuletide offering A Sugar & Spice Holiday, which starred Jacky Lai. Eirene Donohue penned the holiday film and Jennifer Liao directed, and they, too, are AAPI.

“I definitely think as more stories get told, especially with Shang-Chi [and the Legend of the Ten Rings] doing so amazingly, things are definitely changing for the better,” Kwan adds. “It’s an incredible time and space.”

Shih agrees. “The rise in inclusive storytelling that has been happening over the past few years, as well as the rise of female stories being authentically represented by female filmmakers, is a game-changing movement,” she says. “It was important to me that we had an inclusive and diverse cast and crew. Change does need to happen in our industry. If one person starts doing it, that one decision allows more space at the table rather than fighting for one seat.”

For Hu, an NCIS, NCIS: LA and X2: X-Men United alum, feeling seen on set mattered as much as playing against type.

“Everybody sees me as the martial arts girl, kicking butt,” she says. “But kicking cancer’s ass in this role was difficult to prepare for, but had the biggest payoff at the end. It was absolutely amazing, and I’m so thankful to be able to do something like this. It was such a sisterhood and easily the best project I have ever been on.”