When it came time to continue the horrific tale of his redheaded killer doll, creator Don Mancini knew the small screen was where Chucky belonged.

“The eight-hour format [gives] you storytelling real estate,” he tells TVLine. “We have more time to get you involved with these characters, and you get to know them much more as human beings than you can in a 90-minute film.”

Plus, there’s more time for the bodies to pile up, right?

It’s been 33 years since the world first met Chucky in the movie Child’s Play, and in Syfy/USA Network’s upcoming continuation (which starts slashing Tuesday, Oct. 12 at 10/9c), the murderous doll (once again voiced by Brad Dourif) is back for more bloodshed. This time, he attempts to mentor (sure, let’s call it that) a young boy named Jake (Zackary Arthur) who buys the doll at a local tag sale. From there, it’s all chaos, fire, blood, terror… you know. The usual.

The bullied Jake suffers from a rough domestic life, so the timing is just right for the possessed doll to try and warp the boy’s already fragile mind. But when multiple murders seem to revolve around him, the town’s suspicious eye falls directly on Jake.

The cast of characters also includes his much more popular cousin Junior (Teo Briones) and his pal Devon (Björgvin Arnarson). And then there’s Lexy (Alyvia Alyn Lind), the queen bee of the school who tortures Jake every chance she gets. While Jake begins the series as a social pariah and victim to Lexy’s ugly abuse, Chucky utilizes its multi-episode format to flesh out its characters (when it’s not carving flesh, that is) as the group soon learns all about the doll’s devious behavior, and later, tries to work together to stop the madness. 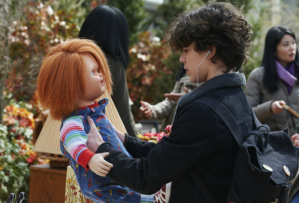 “The characters seem, on the face of it, to be one thing, but then you find out a little more about them, and we start to peel the onion,” hints Mancini. “Having more time and space increases the tension because you get to know them much more as human beings than you can in a film.”

As if unleashing a twisted doll onto society isn’t enough of a problem for the reluctant teen, Jake’s sexuality (he’s gay) adds another layer to the high school growing pains he faces.

“It’s interesting to do something with, for lack of a better term, a social statement, but to come at that through the lens of a horror character as well-known as Chucky,” Mancini says. “We’ve seen [Chucky’s] home life, his family life, his difficult marriage, and he has a gender-fluid child. He struggled with that in Seed of Chucky, but at the end, came to accept it. So he’s in a good position to become Jake’s seeming ally.”

Chucky is “not a bigot, he’s not homophobic, he’s not racist,” Mancini adds. “He’s just a psychopath who doesn’t discriminate. He’ll kill anybody.”

While the series does stand on its own for the uninitiated, Chucky is a direct sequel to the last film in the franchise, 2017’s Cult of Chucky. Mancini says he deliberately left multiple loose threads throughout the movie with the hope of setting up a TV series, and he confirms all of those cliffhangers will be addressed throughout the season.

We’ll eventually find out what happens with Nica (Fiona Dourif), who, when we last saw her, was possessed by Chucky and kissing Tiffany (Jennifer Tilly). The duo escaped the scene of a destroyed mental institution that had just gone into lockdown following Chucky’s latest spree. As for Tiffany, who frequently snail-mailed the doll to various victims throughout the years, she (and Tilly) will also be back.

“Where we left Chucky wasn’t an accident,” Mancini confirms. “I was putting him on the road to a sexual exploration, and I enjoyed the thought of blowing people’s minds like, ‘What? Chucky’s sexually fluid now? What does that mean?'”

Though he hesitated to elaborate further on the series’ returning veterans (which also include Alex Vincent reprising his role as Andy Barclay, and Christine Elise returning as Kyle), he did confirm that Chucky’s former film adversaries will show up in the season’s back half.

“We do spend a substantial amount of time with those characters,” he says.