Young Sheldon on Thursday stopped short of revealing whether or not George’s infidelity began with next-door neighbor Brenda Sparks.

As you’ll recall, the Season 4 finale hinted at George’s predestined adultery. During a heated argument with Mary, Sheldon’s father acknowledged that he was unhappy with how his life had turned out, then grabbed his car keys and left. The next time we saw him, he was at Nate’s Roadhouse, where a newly single Brenda approached him and asked if he’d like some company. “Sure,” he answered, before the episode cut to black.

Thursday’s Season 5 opener picked up immediately where we left off. George and Brenda got drunk and discussed their shared love of Lynyrd Skynyrd. Turns out both of them were at the same concert in 1976. Small world, huh? When Brenda asked George if he’d like to dance, he answered, “No, there’s people here.” So, Brenda suggested they take the party elsewhere.

“What do you have in mind?” George asked.

“Hershel does have the kids…,” she replied, inferring that they go back to her place.

But almost as soon as the suggestion was made, George put his hand on his chest. Was he having another heart attack? 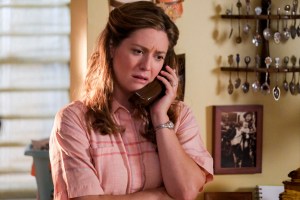 Brenda eventually called Mary and told her that George was at the emergency room. Upon Mary’s arrival, Brenda explained that she ran into George at the bar, and next thing she knew he was clutching his chest, conveniently leaving out key details. “Thank the Lord you were there,” an unsuspecting Mary said. “Who knows what would’ve happened if you hadn’t been there?”

Soon after, the doctor came out and told Mary that her husband was suffering from minor angina pectoris, but he’d be just fine (at least for now). They’d keep him for observation, but he’d be able to go home soon. A relieved Mary went in to see George, who was equally delighted to see her. But as soon as Brenda entered behind her, George’s heart rate spiked — an obvious case of guilt that stuck with him even after he returned home to recuperate. 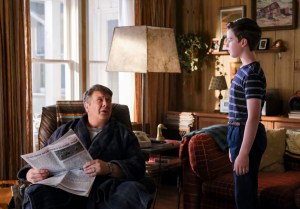 Back at home, Sheldon was determined to have his father punish him for running away with Missy. George, however, was in a forgiving mood.  “Buddy, it’s been a rough week,” he said. “We’re just glad you’re safe.” But Sheldon wouldn’t take no for an answer. “If actions have no repercussions, society breaks down and everything devolves into chaos,” the boy genius explained. “Socrates maintained that the man who lies to himself has an enemy living within. He’s not even a person, he’s just a chaos of selfish desires wrapped in an animal hide.”

As if George didn’t feel bad enough, in came Pastor Jeff with a delivery of get-well cards and a prayer for his ailing congregant. “This is a good man,” the pastor proclaimed. “A family man, a devoted father and a faithful husband. Bless him and everything he does.” (Heh.)

Eventually, George confronted Brenda at her home. Regardless of what did or did not happen, they both felt guilty. Had George not suffered a medical episode, who knows what would’ve happened that night?

“Nothing actually happened,” George told her. “There’s no reason to feel guilty. I mean, did we have too much to drink? Sure. Did we talk about going home from the bar together?” Yes again, but George insisted that there was “no need to apologize because we didn’t go… All we did was have a nice time in a public place. Is there anything wrong with that?”

“Maybe because it was nice to talk to someone and feel special,” Brenda proposed. And it was, George replied. The two then stared into each other’s eyes for what felt like an eternity before Brenda suggested that George get up from her kitchen table and go.

Assuming Young Sheldon doesn’t retcon George’s infidelity (and we suspect that might happen), there is a still a chance that something will happen between George and Brenda. In a Season 10 episode of Big Bang Theory, Sheldon confided in Penny that the reason he always knocked three times before entering a room was because he walked in on his father with another woman when he was 13 years old. (At the start of Young Sheldon Season 5, the title character is 11.)

What did you think of Young Sheldon‘s handling of George and Brenda’s night out? Based on how things ended at Brenda’s place, are you expecting something will eventually transpire between them? Grade the episode via the following poll, then hit the comments with your reactions.