Are human beings capable of mercy, or do we always favor the sweet satisfaction of revenge? That’s the latest question posed by B.J. Novak’s anthology series The Premise, and in the season finale, a tech-savvy butt plug (yes, you read that right) helps explore yet another dark facet of human nature.

How, exactly, does a sex toy fit into this moral quandary? Read on for a recap.

We open with a young boy, Daniel Jung, as he’s tortured inside the halls of his school. The bully, Eli Spector (Perry Mason‘s Eric Lange), grows up and is in danger of losing his home, despite his attempt to start up a financial services company. His wife suggests he reach out to his former victim, who is now the biggest international banking CEO, but he cuts her off: He’s ashamed of his behavior back then. “He shouldn’t forgive me,” he tells her.

Eli eventually relents, and surprisingly, Daniel (Hawaii Five-0‘s Daniel Dae Kim) takes the meeting. After exchanging pleasantries, Eli apologizes for “the way I was,” and his words seem sincere. Daniel, however, says he wouldn’t be who he is today without those obstacles. It motivated him. Before Eli can get his full spiel out, Daniel stops him. Rather than follow “what the popular kids are doing,” he says Eli should find something that everyone sees as worthless, and elevate it to something priceless.

His suggestion: a butt plug that changes the world. Daniel says he has a history of proposing things that sound outlandish, but turn out to be unprecedented successes. This could be one of those things. “You need to look into my eyes and ask yourself whether, for a person in my position, mercy is a stronger satisfaction than revenge,” he says. He gives Eli one year to create the greatest butt plug the world has ever seen.

Eli’s wife takes the words right out of our mouths: “Is he f–king with you?” 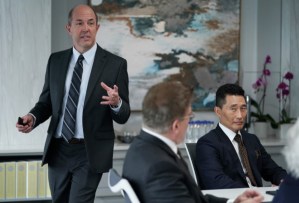 Eli starts and seems to be crushing it. The further he gets, the better he sounds as he compares Apple’s iPhone and Starbucks’ coffee to the sex industry, dazzling the board with financial facts, graphs and philosophies. But the look on Daniel’s face remains stern, as if Eli’s confidence is slowly filling him with rage.

Then, he then takes it to the next level. What if this object could provide relief for constipation? What if it had a built-in Wi-Fi camera that could perform colonoscopies and save lives? After conducting multiple focus groups, Eli claims customers want to pay $999 for this product because the extra cost helps counteract the stigma of a butt plug. Plus, it turns the product into a Veblen good, like a Lamborghini or a bottle of fine cognac.

He ties it all up with a bow, pulling Daniel and Eli’s complicated past into the presentation, and thanking him for the project. The board is impressed with Eli’s knowledge and presentation. But then Daniel chimes in asking: “You can look me in the eye and tell me you put your entire heart and soul and vulnerability into this presentation?” The answer is, of course, yes. “I’ll tell you exactly what you can do with your butt plug,” Daniel continues. “You can shove it up your ass.”

The board breaks out in laughter, while Daniel paints his face with a s–t-eating grin. Eli doesn’t seem that surprised, and on his way out the door, he (sincerely?) thanks Daniel. At home, Eli tells his wife: “Now I’ll be the greatest regret of his life.”

In the closing scene, Daniel takes Eli’s butt plug prototype, and places it in a case filled with other butt plugs of various shapes and sizes.

Best episode about butt plugs you’ve seen all week? Grade the episode and season below, then sound off in the Comments!