Batwoman’s Ryan Wilder finally got her life together, but now it looks like her troubles are only just beginning.

As you’ll recall, Ryan (played by Javicia Leslie) was released from parole, moved out of her van and finally accepted the Batwoman mantle as her own, following a heart-to-heart with Kate Kane. Then, during Ryan’s season-ending visit to Arkham Asylum, Alice dropped the bombshell that her frenemy’s birth mother was still very much alive. Season 3 of the Arrowverse series, premiering Wednesday, Oct. 13 at 9/8c on The CW, will tackle the fallout from that reveal.

With the Season 3 introductions of Jada Jet (played by Robin Givens), a business tycoon who may or may not be Ryan Wilder’s potential birth mother, and potential brother Marquis Jet (Law and Order: Organized Crime’s Nick Creegan), Ryan will struggle with a potential family that is very different from what she used to fantasize about as a foster kid. This will make things even more complicated for the caped hero, who has her own mess to clean up with the Bat trophies that went missing in Season 2. 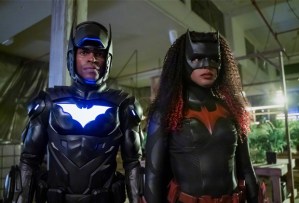 Former GCPD detective Renee Montoya (Gotham’s Victoria Cartagena) will lead the charge in the recovery of those dangerous objects. “She’s old school, and she’s been around, and she remembers Batman’s Gotham and Gordon’s Gotham,” Dries says. “She knows that things don’t end well when people get their hands on [the Bat trophies],” Dries explains. “[Both Kate and Ryan as] Batwoman have done a great job of keeping the streets relatively safe for the last few years, but Renee sees a storm brewing — and she is terrified.”

In addition to recovering said trophies, the Bat Team will also be preoccupied with their own personal struggles. Luke found the Batwing suit and will spend the season figuring out the glitches in the software, among other things. “This will pull out a more personal story for Luke, as he’s grappling with that plight of what it means to be a hero versus what it means to put on a suit,” Dries previews. Meanwhile Mary, who will finally become a credentialed doctor, will struggle with figuring out her place within the Bat Team.

Also feeling lost this coming season is Sophie, who left the Crows and is now untethered to the rigid structures she’s used to dealing with. Dries says that Season 3 will show her in an “uncharacteristic manner,” and that she’ll remain an important asset to the Bat Team. And as Sophie continues to work with them, she “starts to get closer to Ryan — and we start to build that friendship to see if it’s bubbling into something more.” 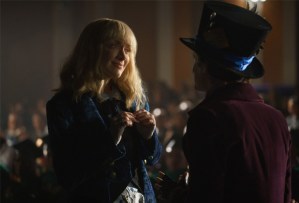 Season 3 will also see the show delve deeper into Alice’s mental health. Although she was arrested at the end of last season, Dries confirms that Alice won’t spend a lot of time in Arkham. She will, however, be dealing with a personal crisis. “As she’s not one to sit around journaling her problems, she’s struggling with how to cope with these problems, and who to talk to, and if she even wants to admit her problems,” Dries shares. “A lot of our theme for this season is mental illness and mental health, and Alice is a great representation of somebody dealing with a mental health problem and the s–ty ways that they’re treated, and her fear around the taboo of that… Arkham is one of the biggest crimes to humanity, so it’s not really helping her with her problems.”

Dries and Batwoman’s writing staff thought deeply about the impact of “the psychotic villains who are massive serial killers and have some psychological illness” in the comics, and the implication that “crazy people are bad.” Though as Dries notes,  “We don’t have any solutions to it, but we bring it to the surface. Like, you can’t just call somebody crazy and assume they’re a bad guy.”

A few major villains are headed to Gotham this season, including the Mad Hatter (Schmigadoon!‘s Amitai Marmorstein) and Poison Ivy (Jane the Virgin alum Bridget Regan).

“I’m super excited about the Poison Ivy storyline. There’s a huge facet of it that we haven’t revealed to the press that will be really fun for the audience to participate in,” Dries teases. “We do a combination of staying true to the Poison Ivy canon and what we normally do, which is put our own spin on it. It’s a major story arc of the season, and we make it really really hard on Batwoman.”