Disney+’s What If…? animated Marvel series wrapped its (truncated) nine-episode run on Wednesday. Who all was assembled to battle Infinity Ultron? And whose return was teased in a mid-credits scene?

Coming out of Episode 8, in which Infinity Ultron emerged as an incredibly formidable threat (and even dragged The Watcher himself into the mix), the finale opened with Uatu dropping in on Captain Carter (in the midst of battling Batroc aboard the Lemurian Star)… Peter Quill (who was being tortured at the DQ by his dad)… Party Thor… Killmonger (just as the Wakandans were hunting him down for murder)… Star Lord T’Challa… and a Gamora variant who famously had defeated her father Thanos (though that backstory was chronicled in a “lost” episode that has been bumped to Season 2). Pulling these “chosen” ones from their respective realities and uniting them with Strange Supreme, The Watcher lays out their mission — to stop Infinity Ultron.

Making camp on a dead planet (so as to better alert Infinity Ultron to their presence), these Guardians form a simple enough plan: Strange Supreme will protect them as long as he can with a protection spell, until they can pinch the Soul Stone from Infinity Ultron and use Gamora’s Infinity Crusher (another apparent artifact of her “lost” episode) to, well, crush it and stop their foe in his tracks.

Once Infinity Ultron arrives, that attack plan proceeds well enough, with the Guardians pummeling him again and again, from all directions — and most entertainingly when Strange turns Mjölnir into a veritable swarm of hammers!

The Soul Stone is eventually pried free, after which we get a sequence akin to Temple of Doom‘s cold open, with the gem being kicked about as everyone — including Dystopian Black Widow, who pulls up on a motorcycle — struggles to grab it. At one point, Strange Supreme drops a horde of zombies atop Infinity Ultron — Zombie Scarlet Witch included, though the A.I. quickly dispatches of Wanda. Ultron nonetheless winds p pinned down, Gamora loads the Soul Stone into the Crusher, and she then uses the gizmo to chop up that and every Infinity Stone in his armor. 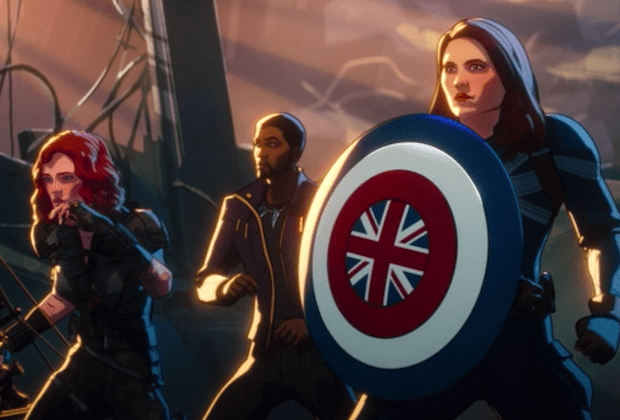 Except… an undeterred Ultron rises up and gloats that Gamora’s device was created to uniquely destroy the Infinity Stones of her universe, not his. He then focuses his attacks on Strange, knowing that the sorcerer is using his powers to protect the others. That is when Natasha enlists Peggy for a side mission, with the former zooming her motorcycle up incline after incline, to jump her bike close to Ultron, while Peggy leaps onto his head and pulls his helmet up to expose his eyes/circuitry. Nat then launches one of Hawkeye’s trick arrows into Ultron’s eye, unleashing the Arnim Zola AI into the ‘bot. Zola soon takes over, plummeting the armor to the ground.

Killmonger — who you had to figure was never to be fully trusted — steals Ultron’s vibranium armor, Infinity Stones included, arguing that they could use the power to change/improve/save each Guardian’s world. The others agree to disagree, and luckily Zola does too, rising up in Ultron’s remaining form to challenge Killmonger. With the Infinity Stones currently tethered to no one, The Watcher works with Strange to capture the Zola/Killmonger face-off inside a pocket dimension, which Strange agrees to babysit in perpetuity. Each Guardian is then returned to the exact time and world they were plucked from, though Natasha refuses, given that her universe is so barren. Instead, The Watcher drops her onto a S.H.I.E.L.D. helicarrier, alongside Nick Fury, as they battle Loki and an Asgardian army in the Episode 3 universe where Hank Pym had slain many would-be Avengers.

Last but not least, in a mid-credits bonus scene, the Natasha that Peggy was reunited with in her timeline reveals to her BFF some very special cargo aboard the Lemurian Star — the HYDRA Stomper that mild-mannered Steve Rogers manned many decades earlier. And someone is inside….

What did you think of What If…? Season 1, and its final battle?