FXX’s silly spy comedy Archer got serious in Wednesday’s Season 12 finale, as Sterling Archer and company bid farewell to one of their own.

Most of the finale was typical Archer chaos: The team plotted to free Archer, who was being held hostage by lisping corporate shill Fabian (voiced by What We Do in the Shadows‘ Kayvan Novak) and Archer’s evil cyborg nemesis Barry. Archer’s mother Malory — voiced by the late Jessica Walter — was absent for most of the episode, with Lana revealing she was “distraught” over her son’s kidnapping, but she did pop up midway through to kick a little butt and beat up Fabian and his goons in a surprise attack. “Guess the old gal’s still got it,” she quipped afterwards. (Walter did reportedly record nearly all of her Season 12 dialogue before her death in March.)

Malory later helped the crew pummel Barry, but she disappeared before the climactic battle ended. Archer and his pals did manage to escape… only to learn that Fabian had purchased their spy agency through a shell company. In a poignant epilogue, Archer discovered a letter to him in Malory’s desk saying that “I thought it would be wise to make my own exit.” She decided that “it’s time to pass the torch,” she added. “Try not to burn yourselves with it.” 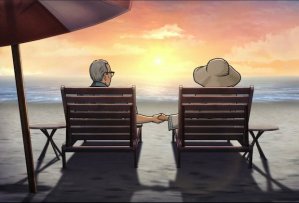 She promised that “wherever I am, I’ll be watching you,” as we saw Malory and her husband Ron Cadillac lounging on a tropical beach sipping cocktails and holding hands. (For an extra layer of poignancy, Ron Cadillac was voiced by Walter’s real-life husband Ron Leibman, who passed away in 2019.) The episode ended with a title card that read, “In Loving Memory of Jessica Walter.”

How did the producers pull off that final scene, though? By going back through the Archer archives, executive producer Casey Willis tells TVLine: “We collected Jessica and Ron’s lines from every season of Archer and combed through them, selecting those we thought would foster the feeling we were trying to evoke. Alongside [series creator] Adam Reed, we worked to create a tribute to our beloved ‘Malory.'”

Drop your thoughts on Malory’s farewell in the comments, Archer fans.