American Horror Story started out more like American Crime Story on Wednesday, with a pair of presidents conspiring to enact one of history’s most notorious assassinations.

In the black-and-white world that was, Ike and Dick (aka Richard Nixon, played by One Tree Hill’s Uncle Keith!) caught wind that JFK was planning to expose a secret human-alien pact made several years earlier. More specifically, in exchange for access to their sweet space technology, Ike allowed the extraterrestrials to abduct 5,000 humans per year to serve as test subjects. That sure sounded like a lot of innocent people at first, but after we saw how much Mamie enjoyed her microwaved salisbury steak, the deal really started to feel worth it. Come on, you heard the woman. It was “melt-in-your-mouth delicious!”

JFK apparently arrived at this crisis of conscience after some political pillow talk with Marilyn Monroe, who briefly came up for air to tell JFK about her own traumatic experience with aliens as a child. Tragically, JFK would never get the opportunity to speak out. And if that’s a spoiler alert to you, I need to have a serious talk with every single teacher you’ve had in your life.

So, what made the pact worth making in the first place? You know, besides those f–ing delicious salisbury steaks?

As we learned during a flashback within a flashback, “Maria” explained that her species needed to assimilate to life on Earth in order to sustain itself. To that end, she needed to create something that was “part human, part… us.” And Amelia Earhart’s baby was apparently a failure, as it killed everyone in the delivery room — including its poor mother — upon being born, something we learned mere seconds before Maria’s own head exploded. It was a hectic moment, even before Ike put a barrage of bullets into Amelia’s murderous alien spawn.

Ike was understandably hesitant to shake anyone’s hands and/or tentacles over this deal just yet, but his decision became much easier when the aliens took control of Mamie and threatened to blow up her head if he didn’t agree to their terms. And while I’d like to believe that Ike acted out of love, you also have to wonder — if his wife died, who would heat up his salisbury steaks?

The episode then returned us to the present day, where the plucky young people we met last week were now racing towards the nearest OBGYN, desperate for answers about what appeared to be four rapidly developing alien pregnancies. A series of ultrasounds confirmed absolutely every single one of their fears, adding the possibility of twins to the mix. But before the doctor had a chance to consult her superior for a second opinion, a pair of suits waltzed into the clinic, shot her dead and kidnapped the four expectant hotties.

The glowing mothers- and fathers-to-be awoke to find themselves dressed like hot Jedis in a blindingly white facility, where they quickly befriended Leslie Grossman’s long-awaited character, an annual abductee named Calico. And in true over-the-top fashion, we met Grossman’s character during a friendly chat with Steve Jobs. (“He can’t dress for s–t, but he’s real sweet.”) 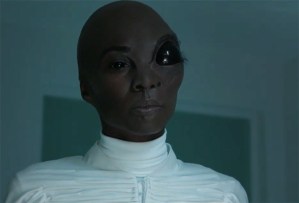 Now that we’re two weeks into “Death Valley,” how are we feeling about Part 2 of Double Feature? And is anyone else suddenly in the mood for salisbury steak? Drop a comment with your thoughts on the episode below.