As The Voice’s Season 21 Blind Auditions came to a close Tuesday evening, the NBC sing-off teed up performances by a John Legend fan who, despite his admiration for the EGOT winner, chose Kelly Clarkson to be his coach; a rocker whose Train cover made Blake Shelton hear the Black Crowes; a trio of sisters who made Ariana Grande do a triple take; and an R&B powerhouse who was likened to a Bruno Mars/Beyonce combo platter. And if you read on, we’ll discuss all of their performances and more…

Aaron Hines (Team Kelly), “Heartbreak Anniversary” — Grade: B | This 28-year-old John fan, who sang for the first time in front of an audience at his eighth-grade talent show (to “Ordinary People”), turned all four coaches’ chairs with a Giveon cover that was at once lovely and… eh, sorta forgettable. “You sounded like you knew what you wanted to do with the song,” John said afterward. I just wished what Aaron had wanted to do with it had been imbue it with the same kind of emotion that he poured into the little bit of “All of Me” that he sang for John on the fly. 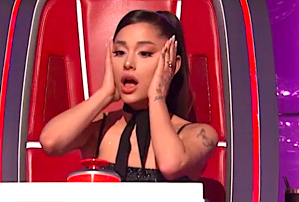 KCK3 (Team Ariana), “no tears left to cry” — Grade: C+ | After starting their rendition of Ariana’s hit with a well-harmonized acapella — their coach’s reaction is pictured — the trio of sisters delivered a not unpleasant, but not extraordinary, performance that kinda felt as leaden as I do on occasions when I finish the whole bowl of guacamole before halftime on The Voice. It wasn’t bad, it just didn’t seem super polished or memorable. Certainly not as memorable as the way that Ari sang “My team is full” afterwards and dropped the mic.

Tommy Edwards (Team Blake), “Drops of Jupiter” — Grade: B- | A 27-year-old from Bigfork, Mt., Tommy, who plays in several bands with his dad, got Blake and John to fight over him by delivering a loose and raspy take on Train’s hit. John thought that Tommy had “electricity”; I just wanted a higher voltage, I guess. On the plus side, though his performance didn’t exactly scream, “See ya at the Playoffs!” I could easily imagine his voice being adapted to country songs, a big advantage with the coach he chose. 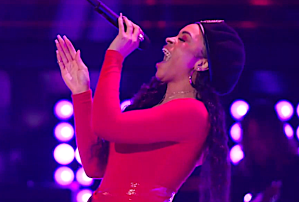 Shadale (Team Legend), “That’s What I Like” — Grade: A- | She had me at the twirl. This 29-year-old, mother to what may be the season’s cutest kid, spun around toward the end of her blow-out-the-doors performance, thus sealing her in my head as not only a vocal powerhouse but also a real entertainer. Now she was electric, as thrilling to watch as to listen to. “You got the equivalent of a four-chair turn,” Blake told her; it only looked like a two-chair turn since his and Ari’s teams were already full. 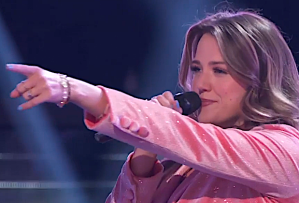 Parker McKay (Team Kelly), “Slow Hands” — Grade: C | This 29-year-old was making her way in the music biz when her mother was diagnosed with a kind of dementia. Sadder still, Mom passed away right before Parker left to do The Voice. On stage, she shook it off and delivered a decent rendition of a dubious song selection. I actually think she could be significantly better than what we heard — there were hints of some Linda Ronstadt in there, no? Niall Horan’s hit just didn’t let her show that off enough.

So, did the show save the best contestants for last, in your estimation? Vote for the singer who most impressed you below, then hit the comments with your reviews and, if you have one already, your winner prediction.