This week’s DC’s Stargirl was absolutely chilling in each and every way, as Eclipso turned his attention to Courtney’s family, prompting Pat to look back on how the OG JSA first defeated the demon — no matter the steep cost.

Episode 9 opened with a sequence set “decades ago,” in which Bruce Gordon was struggling with his debt to Eclipso, whom he had found on an island inside the black diamond and had since been responsible for the explorer’s great fame. Bruce was ready to break things off with Eclipso, but the demon insisted that he was “owed” something and instead tempted Bruce with the notion of landing the woman he loves, Nora — by offing her pesky husband! Bruce succumbed to this invitation, and allowed Eclipso to use him as a corporeal host. This becomes hugely important later on…. 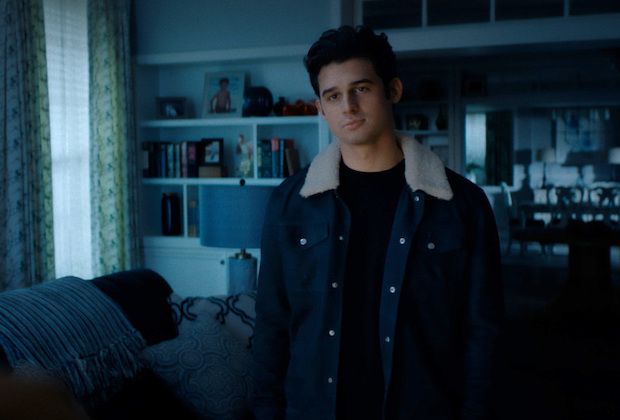 Meanwhile in present-day Blue Valley, Eclipso — with Yolanda/Wildcat off the chess board and Rick/Hourman jailed — targets Pat, Mike and Barbara with his mind-effing handiwork. Pat, for example, imagines a coffin in the living room, with someone trying to get out. Barbara in turn finds herself in a stalled, frozen-over car, where Jordan Mahkent pops up in the back seat to wax romantic about what they could have had. And Mike, well he is also given literal chills when the house temperature plummets, after which Cameron Mahkent comes knocking. Cameron begins tormenting Mike about his role in his father’s demise, and, far worse, uses an icy blast on Buddy the dog!

Pat, during his trauma, flashes back to the JSA’s response to Eclipso’s murder of Dr. Charles McNider’s 10-year-old daughter, Rebecca. After the team gets some intel on this new threat from Jay Garrick aka The Flash, Sylvester splits away from Pat to go confab with The Shade. Later, a shellshocked Sylvester reports back to Pat that apparently the only way to defeat Eclipso is to destroy his human host, which of course flies against JSA policy. But when push comes to shove — after Green Lantern, the Spectre and the Hawks all reportedly come up short against Eclipso — the JSA holds a vote on whether to kill Bruce Gordon (played by Jason Davis). Ted and Rex see it as sadly necessary, while Jay and Pat both vote against it. And though Pat assumed that he and Sylvester were on the same side of the issue, Starman actually breaks the tie with a yea. Though later, once the deed is done, Sylvester is clearly shook by the drastic step.

Back in Blue Valley, Barbara is saved from her icy roadside predicament by a nudge from a wisp of The Shade, while Courtney finds traumatized Mike and then Pat, using a touch of Cosmo to pull them out of their hallucinatory states. Pat, who in the final throes of his hallucination was being tormented by adult Bruce Gordon, confides in Courtney the OG JSA’s dark secret, that they chose to kill Bruce Gordon back in the day — and how afterward, the team members went their separate ways and didn’t reunite until the ISA formed. And even then, Pat says, they were never the same.

Courtney recoils at this killer reveal, and even more so when she realizes that Barbara already knows. And the episode closes with the Whitmore-Dugans verbally lashing at one another in the kitchen, while Eclipso as a beaming young Bruce watches from outside….

What did you think of “Summer School: Chapter Nine”? Grade it below!