In the latest installment of the beloved OWN drama Queen Sugar, Ralph Angel fought against the long and intrusive arm of the law after the sheriff showed up to excavate for the possible remains of rumored murder victims.

Nova had written in her book that their father had possibly murdered a couple of racists and buried their bodies on his property, and a human bone was discovered. But will it be the smoking gun the law thinks it is? Fans will find out when the show airs tonight at 8/7c.

Lisa France, a Queen Sugar producer who also directs installments of the series, says no matter what, the answer will lead to more questions.

“Season 6 is all about awakenings,” France tells TVLine. “All sorts of questions will continue to emerge, like ‘Who are we as a couple?’ and ‘What was done in the past that hasn’t been dealt with yet?’ Identity is also a big part of the theme, and so is creating the future the Bordelons want for themselves.”

Vi and Hollywood will explore new horizons and appreciate the queries and answers that arise. But Charley and Davis, and Darla and Ralph Angel, will face tougher conundrums.

“The hard thing about self-discovery is the turmoil it can cause,” France adds. “There will be confrontations and mistruths all because when you love someone, you want to protect them. But at what cost?”

The biggest point of contention between Ralph Angel and Darla is money. Darla has a trust her parents set aside for her, but Ralph Angel doesn’t want her to touch it. Meanwhile, they’re under water because of all of those payday loans Ralph Angel took out, and he’s contemplating illegal activities with his old prison buddy Theo. 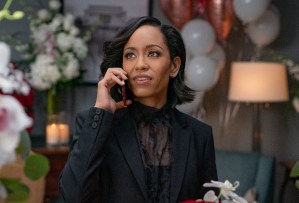 As for Charley and Davis, they’re happy when they’re alone, but Charley is feeling the sting of public judgment and social media ire, even though she and Davis announced their reconciliation on the Gram.

“Every action has a consequence,” France concludes. “But when you make choices that aren’t so great, your results may not be so great.”

Are you worried about the trouble Ralph Angel could land himself in on the next installment of Queen Sugar? Can Charley and Davis survive the court of public opinion? Drop your thoughts in the comments.