Yorick may be the last human left alive with a Y chromosome, but he’s far from the only one suffering existential dread.

In Episode 6 of Y: The Last Man, Hero (Olivia Thirlby) continued spiraling due to the guilt she feels from accidentally killing her boss-turned-lover. Considering her alcoholic tendencies and strained relationships with her family (with whom she’s now estranged, thanks to the event), Hero’s purpose and place in this newfound danger-zone-of-a-world remained a big ol’ question mark, even after she and Sam were taken in by Roxanne, a former homicide detective running a safe haven for women. But Roxanne’s hard exterior and (maybe?) sinister operation made Hero uneasy, despite the potential opportunity it presented for her to erase her sins and start fresh.

But who Hero will become and whether she’ll stay at the compound remains to be seen. For Thirlby, the dystopian world’s moral gray areas and heavy emotional tolls raise the stakes for Hero in major ways that will continue to light her path, wherever that may lead. “Hero’s character is deeply fleshed out,” the actress tells TVLine. “Her journey, her nuances, her whole narrative is alive and dynamic in a way that is a growth from the source material.”

Below, Thirlby breaks down Hero’s messy relationships, challenging upbringing and the mixed feelings her character has toward Roxanne’s odd gang of outcasts.

TVLINE | Hero’s relationships are complicated, to say the least. Though they have yet to reunite, how would you describe her relationship with her brother Yorick?
OLIVIA THIRLBY | Hero and Yorick have a sibling bond that is extremely close. They’re two of a kind, and the only two of their kind. While that breeds a tremendous amount of interdependence and closeness, I think it also [creates] animosity, frustration, irritation… they have a love/hate relationship for sure. The foundation of it is love, but the expression of it is hate.

TVLINE | Hero and Yorick both seem lost in their own ways. Does that stem from growing up in the shadow of their politically famous mother?
Their mom [Diane Lane’s Jennifer Brown] takes up a lot of space, and in the story of the Brown family, they’re all the side characters, and Jennifer is the lead. Hero and Yorick are never allowed to make mistakes. They’re never allowed to get in trouble. They can’t go to their parents when they do something bad. They have to go to each other, and that’s something that’s really bonded them. They’re the ones who always have each other’s backs no matter what. Of course, the irony is they both make a lot of mistakes, and neither of them are, on paper, the people their parents want them to be, so they’re also really bonded in that. That’s a rough life to be walking around, feeling like you’re a disappointment.

TVLINE | Moving on to Hero and Sam, we saw them lock lips under distressing circumstances. Was it just a heat-of-the-moment thing, or is there something deeper between them?
It’s much deeper than a friendship. It’s a very deep, but frozen, river that they skate on the surface of. That undercurrent of deep love and desire for a true partnership is always present, but rarely acknowledged or acted upon. I think the intensity of the circumstances they’re in, the stakes, and the loss, confusion and general un-safety influences the breaking down of that normally held boundary. Elliot Fletcher [who plays Sam] and I spent a lot of time developing the intricacies and backstory of their friendship. They drink together a lot and spend a lot of time together, so a drunk make-out session certainly happens more than once.

TVLINE | In the last two episodes, Hero and Sam are taken in by Roxanne and her crew, but Hero has a tough time settling in. What is Hero’s first impression of Roxanne and the potentially dangerous situation at hand?
Hero has an extremely raised eyebrow towards Roxanne. She is a little put off by her rhetoric, and Hero’s not a follower, so she’s very put off by how into it everybody seems. By nature of who Hero is, if she’s in a situation where everybody is really into some sort of transformational self-awareness movement, she’s going to be completely disgusted by it. It’s sort of like she smells something gross. [Laughs] 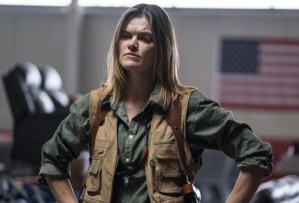 TVLINE | After Hero confesses her act of manslaughter to Roxanne, Roxanne tells her she can be whoever she wants to be now. But does Hero really believe that?
Even though she knows what all these women believe in is bogus, Hero starts to see this as an opportunity for her to step away from the thing she lives with every day, which is this really crushing secret — a secret about something she’s done, and her guilt and belief about what that means about her and who she is. I think that moment with Roxanne is more about Hero edging towards a reality in which she can divorce herself from this thing she can’t really live under. It’s sort of like an easy way out, and because it’s easy, it’s extremely appealing. So I’m not sure if that moment is born so much out of a depth of trust for who Roxanne is, so much as Hero seeing an opportunity and not having the wherewithal to do anything but snatch it up.

TVLINE | One of the other women says to Hero, “We get the feeling you don’t like yourself very much,” and she promptly shuts it down. Is that a fair assessment of where she’s at, though?
Yeah, I think that comment hits close to home. Self-worth is the central fulcrum that Hero’s sense of identity pivots on, and before the event happens, it’s pretty low. [After] the events of the first episode, she doesn’t want to believe that she’s bad. She wants more than anything to be a good person and a loving person and a sensitive person and a person of service. But it’s almost like there’s too much evidence to the contrary. She has a whole lifetime of evidence to the contrary.