As ever, The Voice saved the best for last. After an OK rather than OMG kinda night of Blind Auditions Monday — plus, Ariana Grande doing a hilarious Celine Dion impression — up to the stage the show called a contestant who not only earned a four-chair turn from Ari, John Legend, Blake Shelton and Kelly Clarkson but leapt to the front of the pack. Was she all that, much less all that and a bag of chips? Read on, and we’ll review all the advancing artists’ performances.

Ryleigh Plank (Team Ariana), “Anyone” — Grade: B | If teardrops falling made a sound, this 20-year-old punk-pixie’s voice on her Demi Lovato cover would surely be what they sounded like. She was so emotionally invested that it was almost impossible not to be moved. Perfect, the performance wasn’t. But that somehow gave it an even greater sense of authenticity, one to which the contestant’s idols Kelly and Ariana both responded. Ari even went so far as to pull out the ol’ “I really think that you could win this thing” line.

Jershika Maple (Team Kelly), “Can You Stand the Rain” — Grade: B- | This 24-year-old Louisiana native, inspired by Season 17’s Rose Short (for whom she sang backup), hit a high note, so to speak, with her impressive lower register. “My head almost flew off” hearing it, said Ari. And she definitely demonstrated that there was power to her pipes. But, maybe because the New Edition song with which she auditioned was kinda a snooze, the two-chair turn didn’t make quite as big an impression as I suspect she could’ve.

Manny Keith (Team Blake), “Break My Heart” — Grade: C+ | The son of a musician and a dancer, this formerly shy 31-year-old delivered one of the evening’s funner Blinds. (I know it’s The Voice, not So You Think You Can Dance, but I still appreciate it anytime a contestant moves on stage.) And Manny’s voice was perfectly pleasant, as smooth and elastic as caramel. But despite pulling off a run that qualified as a mini-marathon, the one-chair turn just wasn’t as dazzling as his thousand-watt smile. 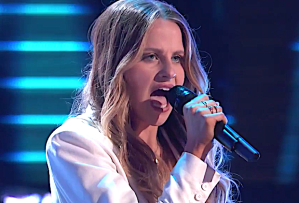 KJ Jennings (Team Legend), “Put Your Records On” — Grade: C | OK, I’ll admit, when this jazz aficionado said that she’d be covering Corinne Bailey Rae’s hit, I shuddered, remembering what a mess of it Andrew Marshall had made in Season 20. It also got promising Jaclyn Lovey knocked out in Season 14. Aand… ? Well, KJ’s rendition was better than either of those; she demonstrated some range and often sang in a whispery tone that made it feel like she was seducing our ears. Unfortunately, there was an all-over-the-place quality to the performance that kept it from feeling cohesive or whole. Rein it in, KJ!

Sabrina Dias (Team Legend), “Garota de Ipanema” — Grade: ??? | Given frustratingly short shrift with only a partial audition shown — too little to hear the “edge” that John did and definitely too little to assign a fair grade — this one-chair turn sounded pleasant… but only pleasant. No way will she be able to compete with the belters in the Battles.

Xavier Cornell (Team Kelly), “Teenage Dream” — Grade: ??? | Kelly thought that this one-chair turn was going to be Season 21’s dark horse. But from what little we were shown of his Katy Perry reinterpretation, I wasn’t sure he was going to get in the race, much less be a contender. He was fine, but “fine” wasn’t going to get the 17-year-old even as far as the Knockouts. 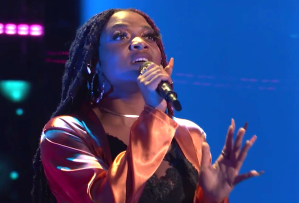 Libianca (Team Blake), “Good Days” — Grade: B- | Born in Minnesota and raised in Cameroon with a TV the size of a Polaroid, this one-named stunner discovered early on that her voice could attract friends as well as attention. Here, she used it to earn a two-chair turn by revealing that no matter the complexity of the number, she controlled her voice, not the other way around. Working against her, though, was a song selection that even John suggested hadn’t let us get the best sense of how she sang.

Sophia Bromberg (Team Ariana), “Heather” — Grade: B | After sharing in her pre-interview that she was recovering from eating disorders, this 16-year-old turned out a haunting, stylish cover of Conan Gray — and I mean “stylish” in that she didn’t just sing it, she worked it, manipulated it, stretched it. It was like the vocal equivalent of a glassblowing demonstration. The three-chair turn’s high note (and that whistle) didn’t wow me as much as the coaches, but the kid’s definitely got chops — and the bravery to just go for it. 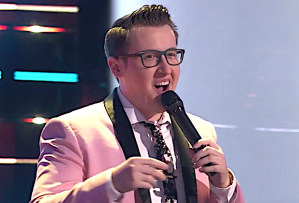 Wyatt Michael (Team Kelly), “Mack the Knife” — Grade: B+ | This 24-year-old Virginian convinced Ariana and Kelly to swivel their chairs by delivering a rendition of the golden oldie that was so pitch-perfect, it would’ve done Sinatra proud. “I do have some groupies,” he told us, “but they’re all women over 65” — not necessarily the group you expect to be texting their votes for The Voice. So it might’ve been shrewder for him to pick as his coach Ari, who comes equipped with a gazillion social-media followers.

Brittany Bree (Team Legend), “Call Out My Name” — Grade: A+ | This native of Louisiana killed her audition from the word “go.” Never mind that she’d never before sung outside the church; you could just hear her bending notes like Wonder Woman does steel bars. Then Brittany really opened wide on the chorus, and forget it — chills city! She doesn’t have a voice for days, she has a voice for weeks! And the spin she put on that last note? Dizzyingly cool. The epitome of a four-chair turn performance. “If your voice isn’t in the finale,” Kelly said, “something’s wrong.” Amen.

So, what did you think of Monday’s Blinds? Vote for your fave in the poll below, then hit the comments with your reviews.