Sunday’s second and final season premiere of The Walking Dead: World Beyond brought to the fore one of our young protagonists’ killer instincts, reunited another with a lost loved one and ushered several of the good guys into what is said to be a safe zone — which all but assures that danger is lurking around every corner. Read on, and we’ll go over the highlights of “Konsekans.”

‘IT’S SMALL WORDS FOR SOMETHING SO BIG’ | After an intro flashback in which we learned that Elizabeth hadn’t given even Huck a heads-up about the CRM’s imminent annihilation of the Campus Colony, we joined the lieutenant colonel in the present as she revealed to Hope that she wasn’t being taken to her father, not yet. First, Elizabeth wanted confirmation that Hope would be an asset, not a troublemaker. Kublek also spun for the teenage genius a tall tale about two hordes of walkers merging after destroying Omaha, then laying waste to Campus Colony. Hard to swallow, right? That, Will told Felix and Iris, was what he told Lt. Newton. And for doing so, he was marked for murder by the CRM. 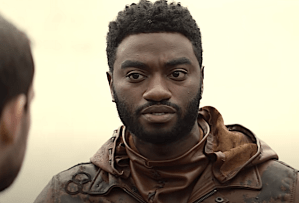 In fact, Will might not have lived long enough to reunite with his boyfriend, had he not wound up in The Perimeter, an abandoned farm town whose Council clears walkers and warns strangers away from the CRM facility. In exchange, the CRM leaves its occupants be. Once Will had taken Felix and Iris to his safe haven, they were welcomed by leader Indira, who asked the newbies, “What do you live for? Living takes effort now. Takes everything. Those still alive have their reasons.” What are Iris’? “I guess,” she said, “I live for Hope.” Later, Will made it plain to Felix the big risk that Indira & Co. were taking by harboring fugitives like them. “One wrong move,” Will said, “and it’s over, for all of us.” 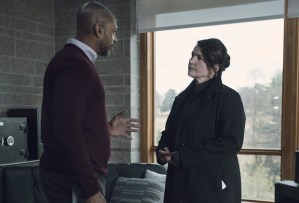 ‘IT’S PAST MIDNIGHT, HAPPY BIRTHDAY, KID’ | Speaking of people in precarious positions, given the option to just up and leave the CRM’s custody, Hope did exactly that and soon wound up in one tussle after another, first with a walker, then with a mad-as-a-hatter human. Beat-up and concussed, Hope radioed the CRM to be picked up. “It’s OK to hate us,” Elizabeth assured her. She and her cronies were content to carry that burden for the greater good. Later, Huck tried to get back in Hope’s good graces by revealing that she had sent Iris and Felix to a settlement where they’d be safe. Why shouldn’t Hope turn around and tattle to Elizabeth? the teen asked. Because, Huck replied, keeping her trap shut would keep Leo safe, keep Felix and Iris safe, and keep her in a safe place herself. 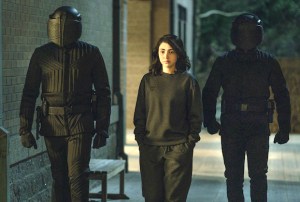 As the episode neared its conclusion, at last Hope enjoyed a tearful reunion with her father. Back at the Perimeter, Iris and Felix wondered aloud why the CRM would cover up what happened at Campus Colony if it really had been hordes — columns, this show calls ‘em. Realizing that they were only alive because they’d taken a risk back there and then, Iris took another, sneaking out and nearly being apprehended by a CRM soldier. When he was momentarily distracted by a walker, she shot him in the shoulder with an arrow, then engaged in a brutal fight that only ended when she’d stabbed him. “It wasn’t empties” that destroyed the Campus Colony, “it was you,” she spat as he lay dying. Then she stabbed him once more with feeling, adding, “That’s what you get.” Whoa, Iris! Who knew?

What did you think of the second (and last) season premiere of The Walking Dead: World Beyond? Grade it in the poll below, then hit the comments with your reviews.