Season 5 of Animal Kingdom may have ended with the Codys riding so high that they clinked beer bottles and broke out their traditional toast (“May we all get what we want and never what we deserve!”). But what they didn’t know was most definitely going to hurt them in the series’ sixth and final season: As “Launch” concluded, the authorities dug up evidence of what Pope would probably agree is the worst crime that he ever committed. Read on, and we’ll go over all the gory — seriously gory — details.

‘YOU’RE THE QUEEN OF OCEANSIDE NOW’ | In the episode’s ’80s flashbacks, Janine continued campaigning to be named (Worst) Mother of Year by telling Julia that they should pack up and go with Andrew to Disneyland. Oh, wait, “we can’t,” she corrected herself, “’cause you made a mistake” while pickpocketing on Mommy’s orders. After giving Jake the boot for questioning her unique parenting style, Janine took the kids to what would eventually be their home to live large while the owners were out of town. When Julia, fearing that the house’s actual residents might return, expressed difficulty in getting to sleep, Janine handed her a glass of booze, which she began to drink ever more quickly after Mom broke the news that she was expecting. “Is Jake the daddy?” asked Julia. “Does it matter?” replied Janine. Chug, chug, chug…

In the present, Craig refused Frankie’s offer of “that tea that smells like ass.” He didn’t need it, he said. Overnight, he was done detoxing and right as rain, so much so that nah, he didn’t need to sleep. “What have I done?” said Frankie’s expression. As the complicated hawala heist got underway… damn, it was impressive. It had more moving parts than a clock. Deran dressed as a cleaner and took a skiff out to be the getaway boat. Pope, J and Craig broke into a delivery truck in order to make it past port security. Frankie followed to keep Deran abreast of their progress. Once the truck driver opened the trailer, the Codys jumped him, and J took over behind the wheel. So far, so good. 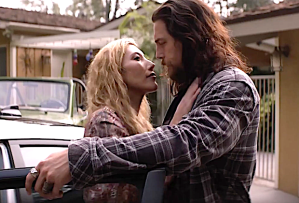 ‘GOOD LUCK CATCHING THAT BOAT, BITCHES!’ | Once J had driven to the shipping container in which the hawala stashed his bank, he let out his uncles and kept watch. Meanwhile, Deran observed Blaise and his crew of juvenile offenders drawing away from him the port police — a little early but basically as planned. The big problem arose when a forklift driver noticed smoke coming from a shipping container in which Craig was trying to break into the hawala’s safe. The guy was about to double back and tell hawala Wyatt when boom! J backed into him with his delivery truck, thus buying his uncles a few precious minutes. By the time Wyatt approached the container, gun drawn, the Codys were ready for him: They knocked him down with the door and took off with his loot.

That is, they took off — except for J, who had to fight to get away from the gun-toting forklift driver and dodge the shots fired by Wyatt to jump off the pier for pickup by Deran, who by then had already retrieved his brothers. “You’re dead!” hollered Wyatt. But, in fact, not a single Cody had gotten so much as a flesh wound. In no time, they’d eluded the seafaring police and made it back to Cody HQ. There, Frankie took her cut and cut out — like, immediately. (So we don’t even get to meet the Vladik that she was so scared of?) Pope insisted that they stick to their old routine of chowing down after a heist, so while Deran ran by The Drop, Craig was tasked with picking up grub. As for Pope, he and J would go put the $1.2M they’d scored in the storage unit that they treated like Fort Knox. 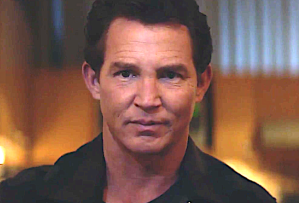 ‘NICE TO MEET YOU, CATHERINE’ | At the bar, Deran gave Tommy a wad of cash and a promotion to manager as a thank-you for sticking around. Tommy did not, as I expected him to, whip out a badge and say, “That’s nice, but you’re totally under arrest.” Instead, he was just kinda like OK when his boss told him to place a $30k booze order every two months — in other words, launder money through The Drop. At Craig and Renn’s, he refused to let her girlfriend pick up her and Nick’s stuff. “Tell her to call me,” he added, “or I’m gonna throw her s—t out.” Aw, Craig, you sweet talker! After depositing the dough from the heist, Pope took J to Pete’s so that he could impress upon Smurf’s old cohort how displeased he was that he’d stolen from them and lied about it — by ripping out the dude’s eye with a pair of pliers! “You get us our share of that coke money by the end of the week,” Pope ordered, “or I’m gonna come back here and take pieces of you till there’s nothing left.” Yikes squared.

As the Codys reconvened at the house, Pope hilariously told Craig and Deran that he’d talked to Pete… as he washed blood off his hands. Over dinner, Deran threw to J to pitch his idea of laundering money through businesses rather than properties. Though J wasn’t prepared to give a detailed PowerPoint presentation, he got Craig and Pope on board. And Deran, of course, had already started. “I thought you wanted to keep [the bar] separate,” said Pope. “Not anymore,” Deran replied. And in the final moments of the episode and the season, police swarmed a construction site at the Cabrillo Circle Development: Catherine’s body had been found. What do you think, Animals? Considering that Pope’s DNA would have to be on the victim, is there any way out of this for him? On your way to the comments, grade the finale and the season in the polls below.