Accused and eventually convicted of drugging and killing his wife Michele MacNeill, the former doctor’s court case painted a disturbing picture. The trial also revealed that he’d also sexually abused his daughter Alexis, who once idolized her dad so much, she went to medical school to become a physician just like him.

Now Grace has created a platform for Alexis MacNeill to tell her family’s tragic story from her personal  perspective with the Lifetime movie The Good Father: The Martin MacNeill Story, which premieres tonight at 8/7c. Burden of Truth‘s Anwen O’Driscoll stars as Alexis, with 13 Reasons Why‘s Tom Everett Scott playing Martin and Buffy the Vampire Slayer‘s Charisma Carpenter costarring as Michele.

“I became friends with various members of the family, specifically Alexis,” Grace says. “I can still remember the night of the verdict and speaking with Alexis. She was telling me how she had gotten married and her mother wasn’t there because her father murdered her. This movie means a lot to me. I don’t like calling it the Martin MacNeill Story. I like calling it the Michele MacNeill story, because that’s the real star.”

Grace, who currently hosts Fox Nation’s Crime Stories with Nancy Grace, says more than anything she wanted to honor Alexis.

“Her wishes and concerns were paramount in my mind,” Grace stresses. “This is not a story. It’s real, with a real victim who died in the family’s bathtub. They had eight children, and they had no idea what really happened to their mother. This is a story told through Alexis’ eyes. She had a lot to do with it. This is not a made-up story. It’s more critical that it’s true to life.” 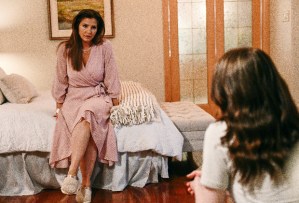 Carpenter agrees. The Angel and Veronica Mars vet says she was drawn to the movie and the role because she wanted more people to learn about Michele MacNeill. But adds, the undertaking wasn’t easy and required a great deal of research on her part.

“Anytime you mix true crime with scripted television, you do have to walk an extra-careful line,” Carpenter reveals. “It’s super challenging to honor her memory and to be able to get across her love of family and her confusion about her husband’s behavior and pathological lies. It was something I took to heart.”