Warning: This post contains spoilers for The Many Saints of Newark.

The saga of The Sopranos continues with the new prequel movie The Many Saints of Newark, and it contains plenty of Easter eggs for fans… including a shocking reveal that changes a lot about what we thought we knew. 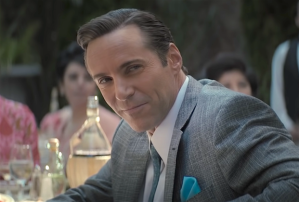 The movie (now in theaters and streaming on HBO Max) opens in a graveyard, with Christopher Moltisanti narrating from beyond the grave. (Hi, Christopha!) He takes us back to 1967, when his father Dickie (Alessandro Nivola) was a key member of the DiMeo crime family in Newark. Dickie takes a young Tony Soprano along with him to pick up Dickie’s father (Ray Liotta), who’s bringing his young Italian bride Giuseppina (Michela De Rossi) back to America with him. Plus, we get our first look at Tony’s parents Johnny Boy (Jon Bernthal) and Livia (Vera Farmiga) at a confirmation party for Tony’s sister Janice. (Tony’s future crewmates Silvio and Big Pussy are there, too.)

We also meet Harold McBrayer, an up-and-coming Black criminal played by Leslie Odom Jr. Harold collects cash for the Italians and hands it over to Dickie, and when one of his underlings misbehaves, Dickie advises him to get him in line. So Harold chases the kid down and puts a shotgun shell in his chest right in front of an Army recruiter. Harold is tired of doing Dickie’s dirty work, though, and the city of Newark explodes into riots and looting when a Black cab driver ends up dead after getting pulled over by police. We also get a new perspective on the flashback from The Sopranos‘ Season 1 episode “Down Neck,” when Tony saw his father getting arrested while taking his sister Janice to an amusement park.

Back at home, Dickie’s dad is beating up on poor Giuseppina, and when Dickie confronts him about it, his dad just says he tends to marry “sluts” — which makes Dickie’s blood boil. He and his dad get into a fistfight in the car, and Dickie ends up smashing his dad’s head into the steering wheel until he’s dead. The riots offer Dickie some cover: He stashes his dad’s body in an old garage and sets the building on fire, blaming it on the rioters. At his dad’s funeral, Dickie sits next to his wife… and catches the eye of Giuseppina. Uh-oh. Before long, he and Giuseppina are fooling around, and he buys her an apartment. Meanwhile, Tony’s dad Johnny gets a lengthy jail sentence, Dickie starts visiting his convicted murderer uncle in prison (also played, confusingly, by Liotta) and Tony gets suspended from school for running his own numbers racket among the students. Dickie tells him he needs to do better, and makes the kid pinky-swear on it.

The Many Saints of Newark: A Refresher on What You Need to Know Before Watching the Sopranos Prequel Movie 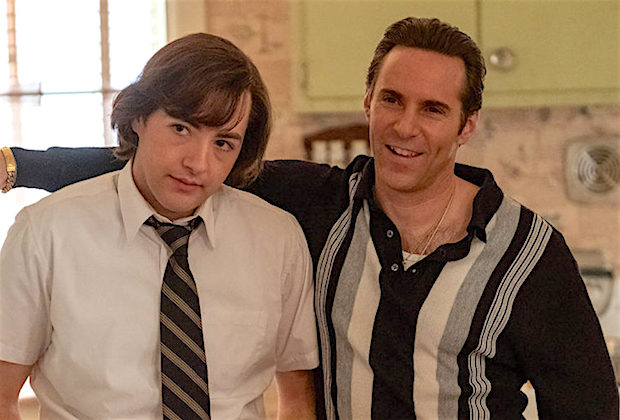 We flash-forward to 1971, and Tony is now a long-haired teen played by James Gandolfini’s real-life son Michael. Johnny Boy is out of prison after four years, and he and Livia get into a screaming fight at his welcome home party. (We also see Christopher as a baby, who cries every time he sees Tony. “It’s like I scare him or something,” Tony muses.) Harold is getting more militant and wants to break away from the Italians and run his own numbers game — which would put him in direct competition with Dickie. Speaking of Dickie, he’s still seeing Giuseppina on the side, and she wants to open her own beauty salon… and for Dickie to leave his wife for her. Tony is still making trouble, too, hijacking a Mister Softee ice cream truck with his pals and taking it on a joyride, handing out free cones to kids.

Tony’s parents don’t know what to do with him — and we get another Sopranos Easter egg when Johnny Boy angrily fires a bullet through Livia’s beehive hairdo, a story Janice tells in Season 6’s “Soprano Home Movies.” Plus, Giuseppina has her own lover on the side: She’s sleeping with Harold! He’s ready to stake out his own turf, and when one of the Italians comes to collect his money, Harold shoots him dead and keeps the cash. In retaliation, Dickie and his crew — including a young Paulie Walnuts, played by Billy Magnussen — kidnap Harold’s bodyguard Cyril, and when he won’t talk, they stick a power tool in his mouth and turn it on, busting his teeth out. (His blood gets all over Paulie’s new jacket.) Silvio shoots the guy dead, but not before they learn it was Harold who whacked the Italian cash collector. 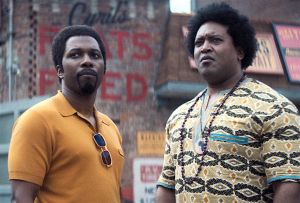 Harold doesn’t take kindly to his friend being killed, and he and some henchmen drive past Dickie and Johnny and friends as they leave a restaurant, firing a hail of bullets at them. A gunfight ensues, with casualties on both sides, and Harold chases Dickie into the empty restaurant, with the two former associates locking eyes before Harold runs off. Meanwhile, Tony gets in trouble at school again, and Livia just scoffs when the guidance counselor tries to tell her Tony has a high IQ and leadership potential. She stopped seeing her doctor, too, when he tried to get her to take psychiatric meds: “I’m not a lunatic.” At the funeral for Dickie’s friends, Tony asks Dickie to get him some of those psych meds to help his mother, and Uncle Junior takes a comical spill on a wet staircase, which inspires guffaws of laughter from Dickie. No, Junior doesn’t like that one bit…

Dickie offers Tony a pair of huge stereo speakers that “fell off a truck,” and when Tony hesitates, Dickie keeps pushing them on him until he accepts. Dickie also takes Giuseppina on a romantic drive up the coast and offers to buy her that beauty parlor she wanted. She’s thrilled, but during a walk along the beach, she breaks the news: “Someone else came along.” A furious Dickie demands to know who it is, and Giuseppina tells him: It’s Harold. Flying into a blind rage, he tackles her into the ocean and strangles her beneath the waves, letting her dead body wash out to sea. A regretful Dickie tells his uncle in prison that his girlfriend died of “pneumonia,” and his uncle gives him advice about Tony: “Stay out of his life.”

Tony keeps trying to contact Dickie — he asks him to buy beer for a party, with a young Carmela by his side! — but Dickie keeps blowing him off. Tony even goes down to his hideout, where they’re getting in a shipment of TV trays (hmmm…), but Silvio sends the kid away and shuts off all the lights at Dickie’s request. A heartbroken Tony tosses his new speakers out of his bedroom window, yelling, “I don’t want any part of this!” Silvio asks Dickie to give Tony another chance, and Dickie agrees to meet the kid the next morning at Holsten’s. (Yes, from the Sopranos series finale.) But that night, as Dickie is unpacking his car trunk, an unseen gunman walks up behind him and puts two bullets in him, killing him. Later, Uncle Junior takes a phone call at a pay phone, telling him: “It’s done” (!!!).

Whoa: So that means Uncle Junior actually killed Dickie, which solves a mystery that Sopranos fans have puzzled over for years. In the Season 4 premiere, “For All Debts Public and Private,” Tony told Christopher that a cop killed his dad, and Christopher exacted revenge on that cop, but the cop claimed he had nothing to do with it. Looks like the cop may have been right… and Tony should’ve pointed the finger at his own uncle. Back in 1971, Tony gets stood up at Holsten’s, and we see him devastated at Dickie’s funeral, imagining that the body in the casket reaches out to him for one last pinky swear. (Dickie had come through and gotten the psychiatric meds for Livia, too, we learn.) As the closing credits roll, the Sopranos theme song “Woke Up This Morning” plays… and suddenly, it feels like we’re watching HBO on a Sunday night again. (A mid-credits scene shows Harold ruling his new city block like the crime boss he is. But the Italians must think he killed Dickie. Did he ever pay for it, we wonder?)

Did The Many Saints of Newark live up to the hype? Give it a grade in our poll, and hit the comments with your reactions to that Sopranos shocker.