TVLine has learned that Queen Sugar‘s Ethan Hutchison is one of five new recurring actors in Season 2 of Disney’s high-stakes time travel series, which will arrive in January 2022 (on Disney+ and the Disney Channel). Hutchison will play Harper’s great-uncle Sam, while Eugene Byrd (Bones) will play the adult version of the character.

In Season 1, Griffin and Harper (played by Preston Oliver and Kyleigh Curran) found and befriended Savannah (Swamp Thing‘s Elle Graham), a girl who had disappeared decades prior. In Season 2, the series will dive deeper into Harper’s family history and their connection to the Tremont, the hotel Griffin now calls home. But solving mysteries can be costly, and what starts out as a fact-finding mission will turn into an eye-opening adventure that threatens to fracture Harper and Griffin’s friendship. (Check out the show’s scary new teaser above as well as exclusive Season 2 photos below.) 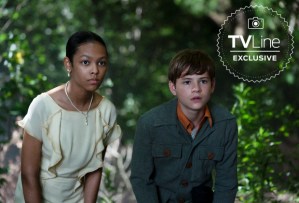 In the course of uncovering new Tremont mysteries, Harper will follow the Tremont ghost to the 1930s, where she gets to know Sam (Hutchison), her great-great grandfather Elijah (played by Person of Interest‘s Robert Manning Jr.), and her great-great grandmother Grace (Radiant‘s Kenneisha Thompson).

Harper will also meet her great-grandmother Daisy, a role Curran will play, as shown in the teaser. Meanwhile, newcomer Johari Washington is replacing Bryant Tardy as Harper’s brother Topher. 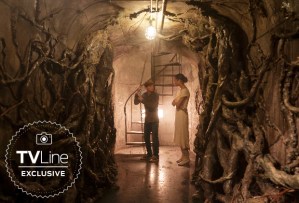 Hutchison’s revealed casting solves a bit of a mystery for Queen Sugar fans. After playing Blue for five seasons, the 11-year-old hasn’t yet appeared on the OWN drama’s current season, because his character moved to Washington D.C. to attend a prestigious boarding school. Although Hutchison is slated to appear on Season 6 at some point, it is unclear if his Secrets of Sulphur Springs role is a sign that his time on Queen Sugar has come to a complete end.