The Freeridge squad is back, and so are the shenanigans.

On My Block’s fourth and final season, premiering next Monday, Oct. 4 on Netflix, finds the whole crew splintered after a falling-out over the Rollerworld money — among other things.

A flash-forward at the end of last season gave an idea of where they were headed in Season 4: Monse went away to boarding school where she found a new core friend group, Jamal traded in his gnomes for a football uniform, and Cesar became fully embedded within the Santos. Jasmine and Ruby, meanwhile, stuck by each other despite losing touch with everyone else.

The final episodes will see the chaotic duo tackle their senior year together. Given Ruby’s neurotic disposition and Jasmine’s flare for the dramatic, things probably won’t go as smoothly as they plan. 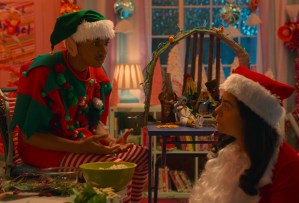 “We are a mess. There’s so much going on with that,” Jessica Marie Garcia, who plays Jasmine, tells TVLine. “I feel like our dynamic is even bigger, but our problems are also bigger… We get into shenanigans.”

Jason Genao, who plays Ruby, notes that Ruby could be a little nicer to Jasmine — Garcia even calls him “a little toxic” — but still thinks they’re “off being the best couple on earth” in the final season.

Elsewhere, Jamal has undergone a full glow up and is now one of the most popular kids in school. It’s a stark contrast to his previous status as a goofball who spent much of his free time talking to inanimate objects. And while he might be rolling with a different crew, that doesn’t mean he’s left his signature gnomes behind completely.

“It’s not On My Block if there are no gnomes. There will definitely be gnomes,” Brett Gray, who plays Jamal, teases. “It’s great because there’s this level of mysticism that comes with the show, and every time it gets really deep, there’s this element of fantasy that comes in… Jamal is still up to his shenanigans, even though he’s a jock.” 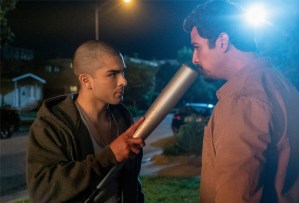 According to Diego Tinoco, who plays Cesar, Season 4 will also determine “if this is endgame between Cesar and Monse.” The Santos have long been a source of conflict for the pair, and Cesar’s deeper involvement with them doesn’t bode well.

Things are looking up for his older brother Oscar, who’s ditched the violent gang and is now focused on creating a better future for himself and his new family. With a steady partner and a baby on the way, Julio Macias, who plays Oscar, says the former gang member won’t let his brother’s involvement with the Santos hold him back from living the life he wants to live.

“It took a long time for him to grow up, and now he’s doing what I think he would have done earlier. He’s catching up for lost time and now living the fullest life that he’s like, ‘I’m not going to wait for my brother to live his life so that I can live my life,’” Macias explains. “I’m really excited to see people see that change because a lot of people in our community do that change, and we never see it. I’m happy that people get to see it.”