One of daytime TV’s longest-running partnerships has been thrown out of court.

Judge Judy is taking her gavel to IMDb TV with a new courtroom show titled Judy Justice — airing weekdays beginning Monday, Nov. 1 on the streamer — and in a new trailer, she introduces the new cast of legal helpers that will join her on the show… including a new bailiff named Kevin Rasco. 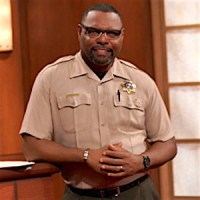 But wait, Judge Judy fans will ask: Where’s Byrd?! Yes, Judy’s reliable bailiff Petri Hawkins Byrd, who stood by her side for 25 years on the syndicated show Judge Judy, will not be joining her on Judy Justice. There’s no word on why Byrd didn’t make the transition — in an interview with the Associated Press last year, Byrd said he would be “honored” to join Judy in her new venture — but Judy praises new bailiff Kevin as “one of the warmest people” in the Judy Justice trailer (which you can watch above).

The trailer also introduces us to two more cast members who will help Judy render her verdicts: court stenographer Whitney Kumar and law clerk Sarah Rose — who “happens to be my granddaughter,” Judy notes. (“Sarah is wired like I am,” she adds. “She’s a little snarky. I like that.”) Judy also touts Judy Justice as “a whole different kind of court show”… well, we know it has a whole different bailiff, at least.

Press PLAY above for a sneak peek at Judy Justice, and tell us in the comments: Will you watch Judge Judy on IMDb TV (even without Byrd)?