Wednesday’s episode, titled “Rage,” found the Intelligence officer grappling with the trauma of being kidnapped and brutally assaulted at the end of Season 8. It’s only been a few weeks since the incident, and while she’s not quite ready to return to the action full-time, Burgess did help her cohorts take down the corrupt parole officer responsible for killing one of their criminal informants.

Voight urged her to at least try to do the job again before deciding her next move, while Ruzek inquired about a desk job as a potential option. Although Ruzek means well, you can bet that Burgess won’t be strapped to a desk if she can help it.

“No. Solid no,” Marina Squerciati, who plays Burgess, tells TVLine. 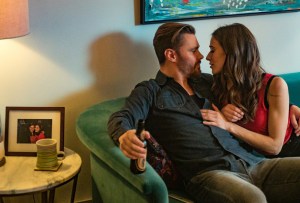 Season 9 will explore what home means for each member of Intelligence, and for Burgess, it’s her daughter Makayla and her ex-fiancé. Ruzek took great care of Makayla while Burgess was in the hospital, proving that the man who couldn’t get it together in Season 3 is long gone.

“Ruzek is really maturing,” Squerciati shares. “When our engagement [ended], a lot of reporters were like, ‘When is he going to mature and be the person you need him to be?’ I think that’s what we’re seeing, him becoming this family man, and it’s really great.”

It’s hard to pin down what Ruzek and Burgess are to each other right now — he’s currently crashing on her couch while helping her raise Makayla — but both seem content with not putting a label on their current situation. “We’re just weirdly like roommates that are raising Makayla together, that love each other. I have no idea where it’s headed, but it’s kind of fun to live in this weird, ambiguous world,” Squerciati explains.

The actress thinks there is potential for the pair to rekindle things at some point, and she has her own pitch for how to bring them back together. “I’d kind of like someone else to come along, that one of them gets jealous and realizes what they’re missing,” she muses.

This season, Burgess will struggle with creating a stable home life for Makayla, who’s also experienced her fair share of trauma. According to Squerciati, that stability might mean “relying on Ruzek more and more.”

“There are going to be some tests with Makayla coming up,” she adds. “So far, they’ve been building, and I think something might crumble pretty soon.”