Not since the days of Bugs Bunny have we witnessed such a sudden turn in Albuquerque.

Wednesday’s episode of American Horror Story: Double Feature, which serves as the premiere of Part 2 (aka “Death Valley”), takes us back to the black-and-white days of 1954, where a New Mexico housewife named Maria is cheerfully planning dinner for her hard-working husband and precocious young son. It’s a pretty picture of wholesome Americana… except for the part where aliens show up, take control of Maria’s body and make her husband’s head explode all over the dining room wall.

Meanwhile, President Dwight D. Eisenhower — Ike, if you’re nasty — has to cut his Palm Springs vacation short after receiving troubling news about a mysterious visitor from above. His wife (played by Sarah Paulson!) suspects him of sneaking off to canoodle with another dame, which isn’t entirely inaccurate, as he arrives at the crash site to discover a woman claiming to be Amelia friggin’ Eartheart. She hasn’t aged a day since her infamous flight several decades earlier (can someone say “hy-a-lu-ron-ic acid?”), but Ike believes her. He also believes her story about being abducted by aliens mid-flight, a tale made even more twisted by her apparent pregnancy. Yet another time this show has impregnated a Lily Rabe character under inevitably disastrous circumstances.

POTUS then oversees a live alien autopsy, which takes a hard left when the alien inside the alien reveals itself to be (A) alive and (B) murderous, which is pretty much the worst two things an alien can be. Cut to both of the scientists’ heads exploding, which makes for three total exploded heads for those of you keeping score at home. Then comes a mysterious floating woman, whose very arrival triggers another series of head explosions — so we can just give up counting at this point. Of course, she’s no stranger to the viewers. It’s our girl Maria from a few paragraphs earlier, and she has something to say to the human race. Unfortunately, we’ll have to wait until next week to find out what that message is. 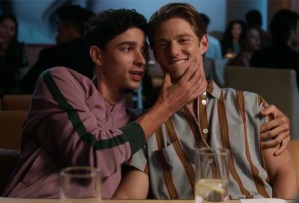 Speaking of heads exploding, the premiere abruptly jumps ahead to the present day, where best friends Cal and Troy have some big news for their gal pals Kendall and Jamie: they aren’t just college roommates anymore, they’re dating! As Cal explains, “Those dorms were small. First, you know, you jack off at the same time in the dark, and then you just start doing it together, and before you know it you’re late for your Great Thinkers of Enlightenment class because you have your best friend’s d–k in your mouth.” So romantic. The girls also have news to share — Kendall’s dad has cancer, and Jamie is apparently allergic to her new boyfriend’s “venomous jizz” — but Cal and Troy’s news definitely steals the show.

The group’s vacation is pretty much a dumpster fire from this point on. First Troy leads everyone to a pond that doesn’t actually exist pond, then the group stumbles on a herd of bulls that have been cut directly in half, and then one of the bulls was maybe still alive? (Or as Troy puts it, “Those half-f–king cows were f–king mooing!”) So when the foursome is later attacked — and apparently impregnated — by aliens on their way out of the desert, it really feels like a fitting end to a crappy vacation.

Did you enjoy your first encounter with “Death Valley”? Grade the premiere below, then drop a comment with your full review.