Just in case anyone out there was on the fence about Eclipso, DC’s Stargirl this week revealed that, on top of everything else, the evil demon is racist to boot.

This Tuesday’s episode was set on the Fourth of July and started out sweetly enough, with school teacher Miss Woods driving out to Rick’s home to not only apologize for accusing him of cheating, but also to deliver college brochures and financial aid information. “College was a place I could start over again,” she shared — and maybe Rick can, too. Rick’s uncle, though, gets wind of and scoffs at the idea, saying, “You’ll end up in jail before you end up in college.”

Frustrated, Rick drives out to the woods to bellow into the void, “I’m so tired of giving everything and getting nothing back!” That’s when Solomon Grundy emerges, to first sit with Rick and sloppily scarf down apples, while listening to a story of Rick’s. When Rick suggests that Grundy has no idea what he is saying, the big guy pats him on the back, then offers up an apple.

Beth, meanwhile, is at home when she hears back again from Dr. McNider, somewhere on the other end of the goggles. He explains that he is still technically “alive,” but trapped somewhere in a… shadowscape? When McNider cuts out, Beth turns away for a moment and we see Eclipso pop up on her laptop screen. Beth’s parents then surprise her with a midday visit and lunch at home. They sit to explain what has been going on with their marriage, saying that while it was very much “love at first sight” when they met, they “lost sight of each other” after Beth was born and grew apart. “Because of you,” Dad makes clear. Already agog, Beth fully freaks when she looks down to see bugs and slugs in her food, and then rushes out. 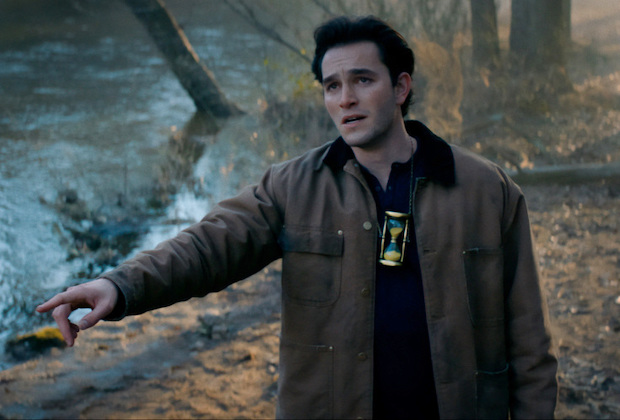 Rick is about to leave the forest when he hears on the radio that a hunt has been authorized to kill the “bear” that has been raiding restaurants and food. A panicked Rick calls Pat, to say that “Grundy needs our help!” Pat, Courtney and Cosmo (the cosmic staff’s newly bestowed name) head out to the woods but can’t find Rick. Rick meanwhile bumps into two hunters, one of which has been wounded by the “bear.” They explain that a 10-year-old girl has gone missing and now is in danger, but Rick insists, “He wouldn’t hurt her!”

Beth meanwhile shows up at Courtney’s house looking for her friend, but finds not a soul — save for wee Bruce, sitting on the stairs. “You’re Beth Chapel. A liar and a thief,” he says, dangling her goggles as an example of something she stole. Beth chases the lad upstairs, realizing that he is in fact Eclipso. In Court’s bedroom, Bruce observes, “The staff chose Courtney, Courtney chose Yolanda, Rick’s dad chose him…. But no one chose you.” That, he contends, is because “you’re no fighter. Fighters are athletic. I guess some of the stereotypes are wrong!” Beth calls him out as a “racist,” before he propels her into the closet. Beth bangs her way out, only to tumble into the ISA HQ, where the OG Starman, Wildcat and Hourman ask, “What are you doing here? You don’t belong here!” Sitting to the side, Bruce chimes in, “You’re all wrong” to be a hero. “Wrong age. Wrong gender…. Wrong color.”

Back in the woods, Rick finds Grundy standing by a stream… with bloodied hands… and a young girl dead at his feet. “Did you kill her?!” asks Rick. “You monster!” Solomon bounds away, and Rick gives chase. Pat and Courtney then arrive at the location and find the girl, who we (and possibly Pat?) realize is Rebecca McNider aka Eclipso’s long-ago victim. The girl’s eyes then flip open, after which she vanishes in a blink. “Eclipso…,” Court surmises.

Rick finds Grundy outside his home and proceeds to give him a brutal beating, beneath the night sky full of fireworks. Courtney and Pat arrive and urge him to stop, saying, “It’s not Grundy!,” just as Rick hurls his victim against a truck. Court zaps Rick to stop him, after which he realizes that he in fact was whaling on his uncle!

Beth meanwhile has found herself in a maze of hallways, leading back to the house. Bruce’s voice chuckles, “You pretend to be brave, but you’re not…. Hiding behind that stupid smile your entire life.” Beth counters, “If I’m so scared, why are you the one hiding?” Eclipso himself then steps out of the shadows and grabs her arm, urging Beth to admit her fear and anger. When he again starts in on the “No one chose you” mantra, Beth responds, “Is that what you need me to do? Give into my worst fear, that I’m an outsider? Because I won’t.

“I’m strong, I’m proud… and I chose myself to be Doctor Mid-Nite,” she declares. “I chose me. Oh, and I love being Black!” Having deflected Eclipso’s mind-eff, Beth finds herself back in her living room, with the goggles on — and Dr. McNider assuring her that she never left her house, and that she saved herself. Beth asserts, “I’m the new Doctor Mid-Nite,” at which point the goggles’ database officially updates itself with her identity.

Beth’s parents then truly come home, and she shares that she has been trying to be something she can’t be. Mom sits her down and explains how she was the first Black doctor in Blue Valley when they moved to town, and as such, “I dealt with some things.” But over time, and by doing good work, she won Blue Valley over. “Beth, you can be anything you want to be,” she says. “Don’t let anyone tell you different. No one.” (Mom then asks about the goggles Beth must now keep on to elude Eclipso’s powers, and she says they are for… swimming.)

Back at Rick’s, we see him in the back of a police car, and an ambulance is pulling away with its siren and lights on, while the actual grundy looks on from behind a silo. Over at the Whitmore-Dugan house, Barbara updates Mike on the nightmares that Eclipso foisted on both Rick and Beth, and how Matt is in critical condition and Pat and Courtney are at the cop shop seeing how they can help Rick. Mike asks what the two of them can do to help, and Barbara says, “Be here for them when they get back.” But as they hug, we see the windows and gutter outside frost over….

What did you think of “Summer School: Chapter Eight”?